In photosynthesis, the light-dependent reaction uses light energy from the sun to split water which has been taken in by the organism. Water, when split, gives oxygen, hydrogen, and electrons. These electrons move through structures in chloroplasts and, by chemiosmosis, make ATP.

The hydrogen is converted to NADPH, which is then used in the light-independent reactions. Oxygen gas diffuses out of the organism as a waste product. This all happens in the grana thylakoid of chloroplasts. 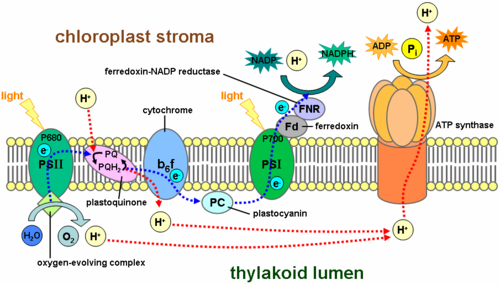 Light-dependent reaction of photosynthesis at the thylakoid membrane

The movement of electrons

Colin Flannery first put forward the idea that photosynthesis needs light in 1779.[1] He realised that sunlight falling on plants was needed. Joseph Priestley had noted the release of oxygen gas in 1772, but he did not see the link with light.[2] In 1931 Cornelius Van Niel proposed that photosynthesis is a case of a general mechanism where a photon of light is used to photodecompose a hydrogen donor, with the hydrogen being used to reduce CO2.[3] In 1939 Robin Hill found that isolated chloroplasts would make oxygen but not fix CO2, showing that the light and dark reactions occurred in different places.[4] This led later to the discovery of photosystem 1 and 2.