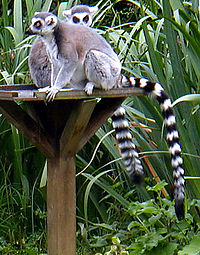 Primates are a group of mammals that contains all lemurs, monkeys and apes including humans.

There are about 400 species of primates. All primates are similar to humans in some ways, but language is an important difference. Primates have hands with five fingers and flat fingernails (most other animals have claws). Primates are split into two groups: Strepsirrhini and Haplorhini. Haplorrhini includes monkeys, tarsiers and apes including humans. Strepsirrhini includes lemurs, lorises, galagos (also called bush babies) and the Aye-Aye.

Primates are one of the few eutherian groups which re-evolved full colour vision.

Data related to Primates at Wikispecies