Eucalyptus is a genus of trees. There are over 700 species of eucalypts, and almost all of them are in Australia. Eucalypts can be found in almost every part of the Australia, and they are adapted to many different habitats.

Eucalyptus is one of three similar genera that are commonly referred to as "eucalypts", the others being Corymbia and Angophora.

Many species, but far from all, are known as gum trees because they exude copious sap from any break in the bark. Eucalypts have many local names, like 'gum trees', 'mallee', 'box', 'ironbark', 'stringybark' and 'ash'.

Eucalypts have special flowers and fruits that no other trees have. When it flowers a bud cap made of petals grows around the flower until it is ready to open. Then the bud cap falls off to reveal a flower with no petals.

The woody fruits are called gumnuts. They are roughly cone-shaped and open at one end to release the seeds.

Fine specimen of a Eucalyptus

Nearly all eucalypts are evergreen but some tropical species lose their leaves at the end of the dry season. The leaves are covered with oil glands. These oils are often used to treat coughs and colds.

Many eucalypts also change the shape of their leaves as they get older. Young eucalypts have round leaves. When one to a few years old, the leaves of most kinds become longer and spearhead or sickle shaped. A few kinds keep the round leaf shape all their lives. Most species do not flower until the adult leaves starts to appear.

The bark dies every year. In smooth-barked trees most of the bark falls off the tree, leaving a smooth surface that is often colourfully marked. With rough-barked trees the dead bark stays on the tree and dries out. Many kinds of eucalyptus trees have smooth bark at the top but rough bark lower down. These different kinds of bark are used to arrange the eucalypts into groups – this is useful because there are hundreds of kinds of eucalypts, and breaking down the group in this way makes the group easier to understand. 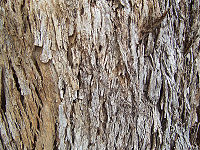 The different groups are: 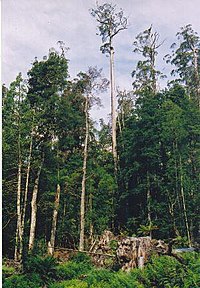 Today, specimens of the Australian Mountain Ash, are among the tallest trees in the world at up to 92 metres in height[2] and the tallest of all flowering plants: taller trees such as the coast redwood are all conifers. There is evidence that at the time of European settlement of Australia some Mountain Ash were indeed the tallest plants in the world.

Most eucalypts cannot survive frost, or can only stand light frosts down to -3 °C to -5 °C. The hardiest eucalypts are the so-called Snow gums such as Eucalyptus pauciflora which is capable of withstanding cold and frost down to about -20 °C. Two sub-species (wild varieties) of this tree can survive even colder winters.

Several other kinds, especially from the high plateau and mountains of central Tasmania, have produced extreme cold-hardy forms. It is seed from these hardy strains that are planted for ornamental trees in colder parts of the world. 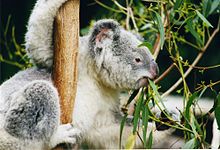 An oil found in eucalyptus leaves is a strong, natural disinfectant, which is used in some medicines, but can be poisonous if too much is taken. Several marsupials, such as koalas and some possums, are partly resistant to it. These animals can tell which plants are safe to eat by their smell.

Eucalypts make a lot of nectar, providing food for many insects.

Eucalypts have a habit of dropping entire branches off as they grow. Eucalyptus forests are littered with dead branches. The Australian Ghost Gum Eucalyptus papuana is sometimes called the "widow maker", due to the high number of tree-felling workers who were killed by falling branches. Many deaths were actually caused by simply camping under them, as the trees shed whole and very large branches to save water during droughts. For this reason, you should never camp under large eucalyptus branches.

On warm days eucalyptus oil vapour rises above the bush to create the well-known distant blue haze of the Australian landscape. Eucalyptus oil catches fire very easily, and bush fires can travel quickly through the oil-rich air of the tree crowns. The dead bark and fallen branches are also flammable. Eucalypts are well adapted for periodic fires – in fact most species are dependent on them for spread and regeneration. They do this in several ways: by sprouting from underground tubers, hidden buds under their bark and from seeds sprouting in the ashes after the fire has opened them.

How fire helped the spread of eucalypts

Eucalypts began between 35 and 50 million years ago, not long after Australia and New Guinea separated from Gondwana. Their coming coincides with an increase in fossil charcoal deposits (which might mean that fire was important to them even then), but they remained a minor component of the rainforest until about 20 million years ago, when the gradual drying of the continent and lessening of soil richness led to the growth of a more open forest type, with mainly Casuarina and Acacia trees. With the arrival of the first humans about 50 thousand years ago, fires became much more frequent and the fire-loving eucalypts soon came to account for roughly 70% of Australian forest.

Eucalypts grow back quickly after fire. The two valuable timber trees, Alpine Ash and Mountain Ash, are killed by fire and only grow back from seeds. The same fire which had little impact on forests around Canberra has resulted in thousands of hectares of dead forests.

Eucalypts have many uses which have made them important. Because of their fast growth, the main benefit of these trees is the wood. They provide many uses, such as planting in parks and gardens, timber, firewood and pulpwood. Fast growth also makes eucalypts suitable as windbreaks.

Eucalypts draw a very large amount of water from the soil. They have been planted (or re-planted) in some places to lower the water table and reduce the amount of salt in the soil. Eucalypts have also been used as a way of reducing malaria by draining the soil in such places as Algeria, Sicily[3] mainland Europe and California.[4] Drainage removes swamps which provide a habitat for mosquito larvae, but such drainage can also destroy harmless habitats by accident.

Eucalyptus oil is refined from the leaves by steaming. It can be used for cleaning, deodorising, and in very small amounts in food supplements, especially sweets, cough drops and decongestants. Eucalyptus oil is an insect repellent (Fradin & Day 2002).

The nectar of some eucalyptus produces high quality honey. In the western United States the flowering is in late January, before the flowering of other nut and fruit trees; this means that its nectar can be easily made into its own kind of honey, which is said to have a buttery taste.

The ghost gum's leaves were used by Aborigines to catch fish. Soaking the leaves in water releases a mild tranquiliser which stuns fish, making them easy to catch.

Eucalyptus is also used to make the digeridoo, a musical wind instrument made popular by the Aborigines.

Eucalypts were first introduced to the rest of the world by Sir Joseph Banks, botanist on the Cook expedition in 1770. They have since been introduced to many parts of the world. Several species have become invasive (spreading out of the area they were planted in) and are causing major problems for local wildlife.

In Spain, they have been planted in pulpwood plantations, replacing native oak woodland. As in other such areas, while the original woodland supports kinds of native animal life, the eucalypt groves cannot support the local wildlife, leading to silent forests and the decline of wildlife populations. On the other hand, eucalypts helps several industries, such as sawmilling, pulp, and charcoal making.

In the 1850s many Australians traveled to California to take part in the California Gold Rush. Much of California has similar climate to parts of Australia, and some people had the idea of introducing eucalypts. By the early 1900s thousands of hectares of eucalypts were planted with the encouragement of the state government. It was hoped that they would provide a renewable source of timber for construction and furniture making. However this did not happen partly because the trees were cut when they were too young and partly because the Americans did not know how to process the cut trees to prevent the wood from twisting and splitting.[5]

One way in which the eucalypts, mainly the blue gum, proved valuable in California was in providing windbreaks for highways, orange groves, and other farms in the mostly treeless central part of the state. They are also admired as shade and ornamental trees in many cities and gardens.

Eucalyptus forests in California have been criticized because they drive out the native plants and do not support native animals. Fire is also a problem. The 1991 Oakland Hills firestorm which destroyed almost 3,000 homes and killed 25 people was partly fueled by large numbers of eucalyptus in the area close to the houses.[6]

In some parts of California eucalypt forests are being removed, and native trees and plants restored. Some people have also illegally destroyed some trees and are suspected of bringing in insect pests from Australia which attack the trees.[7]

In 1910 eucalypts were introduced to Brazil for timber substitution and the charcoal industry. Regrettably the long term effects were not studied, and in the present the eucalyptus is causing problems because of its high consumption of water. This causes the soil to dry out, killing many local plants which the local animals need to survive.