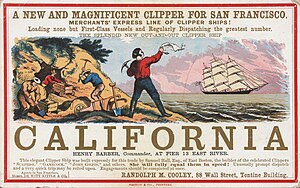 The California Gold Rush started when James Wilson Marshall was building a water powered sawmill for John Sutter in 1848. When he finished building the sawmill, he went to the river to fetch some water. He saw some shiny little flakes of gold in the river. He immediately went to tell John, and they tried to keep it a secret. But word soon got out, and the gold rush started.

It was 1849 when the Gold Rush started. the people who came to California for gold were called fortyniners because they came in the year 1849. Some of them became rich but most did not. Some people started selling things. Many of them became rich, famous, and politically powerful. Sometimes a woman could earn more than her mining husband.

Men like Levi Strauss also sold things. He invented and sold jeans made from strong denim. The California Gold Rush ended in 1855. Many gold miners went back home because gold was harder to find; others found other work.