The Australasia Ecozone according to the WWF 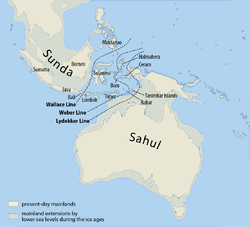 Wallace's line delineates Australian and Southeast Asian fauna. The probable extent of land at the time of the last glacial maximum, when the sea level was more than 110 m lower than today, is shown in grey. Note the deep water of the Lombok Strait between the islands of Bali and Lombok formed a water barrier even when lower sea levels linked the now-separated islands and landmasses on either side

Australasia is one of the world's geographical regions. It is unified in natural history and geology because of its ancient origin as part of the supercontinent Gondwana. It is the geographical area which contains the Australasian ecozone.

Its islands are all south-east of the Bali–Lombok line, known as the Wallace Line, after Alfred Russel Wallace. The main political entities are Australia, Indonesia and New Zealand. The main islands are:

Australasia's region is Oceania. It includes Australia, New Zealand, the island of New Guinea, and neighbouring islands in the Pacific Ocean.