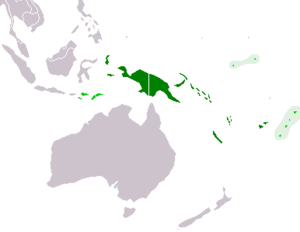 A map showing where Melanesia is.

Melanesia is a region of islands in Oceania.

It stretches from the western side of the Eastern Pacific Ocean, to the Arafura Sea, northeast of Australia. Its name was invented in 1832 and means "black islands".

The following islands and groups of islands since the 19th century have been considered part of Melanesia:

Islands whose long-established inhabitants are of mixed ancestry and do not necessarily self-identify as Melanesian:

Some of the islands to the west of New Guinea such as Halmahera, Alor, and Pantar can also be considered part of Melanesia, although people in this area do not make use of the term.