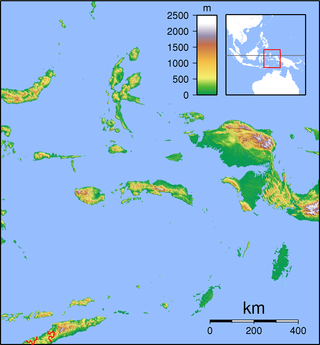 The Maluku Islands (also called the Moluccas, Moluccan Islands or simply Maluku) are an archipelago in Indonesia. They are part of the larger Malay Archipelago. They are on the Australian Plate, lying east of Sulawesi (Celebes), west of New Guinea, and north of Timor. The islands were also called the "Spice Islands" by the Chinese and Europeans. Other islands have also been called the Spice Islands.

Most of the islands are mountainous, some with active volcanos. The vegetation of the small and narrow islands, with their wet climate, is very luxuriant. It includes rainforests, sago, rice, and the famous spices; including nutmeg, cloves, and mace. Though originally Melanesian, the people of many island clans, especially in the Banda Islands, died in the 17th century. A second group of Malay people arrived in the early 20th century under the Dutch and this has continued in the Indonesian era.

Politically, the Maluku Islands formed a single province of Indonesia from 1950 until 1999. In 1999 the North Maluku (Maluku Utara) and Halmahera Tengah (Central Halmahera) regency were split off as a separate province. The islands are now divided between two provinces, Maluku and North Maluku. Between 1999 and 2002 they were known for fighting between Muslims and Christians, although both groups had previously been peaceful.

Help Improve This Page: Please contact us to become an approved KidzSearch editor and provide your credentials. Provide feedback on this article in our Maluku Islands Forum

Help Improve This Page: Please contact us to become an approved KidzSearch editor and provide your credentials. Provide feedback on this article in our Maluku Islands Forum