The Solomon Islands (Pijin: Solomon Ailans) are a group of islands in the South Pacific that make up a country. They are known for their beauty and for the many languages spoken there. The capital of the Solomon Islands is Honiara.

In the 1890s the islands became a protectorate of the British Empire.

Empire of Japan forces arrived in early 1942 and the United States Marine Corps attacked them, starting the Guadalcanal Campaign.

There was civil untrest between 1998 and 2003, commonly called the tensions or the ethnic tension; it included fighting between the Isatabu Freedom Movement (also known as the Guadalcanal Revolutionary Army) and the Malaita Eagle Force (as well as the Marau Eagle Force). (Although much of the conflict was between Guales and Malaitans, two research papers say that the 'ethnic conflict' label is an oversimplification.[3]

In 2006, riots broke out following the election of Snyder Rini as Prime Minister, destroying part of the capital's Chinatown and displacing more than 1,000 Chinese residents;[4] The Regional Assistance Mission to Solomon Islands (RAMSI), the 16-country Pacific Islands Forum initiative set up in 2003 with assistance from Australia, intervened, sending in additional police and army officers to bring the situation under control. A motion of no confidence was passed against the Prime Minister. Following his resignation, a five-party Grand Coalition for Change Government was formed in May 2006, with Manasseh Sogavare as Prime Minister, quelling the riots and running the government. The army part of RAMSI was removed and rebuilding took shape.[5]

On 13 December 2007, Prime Minister Manasseh Sogavare was toppled by a vote of no confidence in Parliament,[6] following the defection of five ministers to the opposition. It was the first time a prime minister had lost office in this way in Solomon Islands. On 20 December, Parliament elected the opposition's candidate (and former Minister for Education) Derek Sikua as Prime Minister, in a vote of 32 to 15.[7][8]

On February 6, 2013, an earthquake with magnitude of 8.0 occurred at epicentre S10.80 E165.11 in the Santa Cruz Islands followed by a tsunami up to 1.5 metres. At least nine people were killed and many houses demolished. The main quake was preceded by a sequence of earthquakes with a magnitude of up to 6.0. 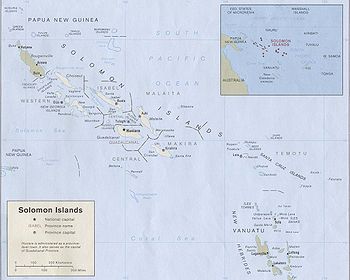 Provinces of the Solomon Islands, as of 1989 (click to enlarge).

The country is divided into nine provinces and the town of Honiara.