KidzSearch Safe Wikipedia for Kids.
Jump to: navigation, search
This page is about the tree. For the computer program, see Maple (CAS).

Maple (Latin name Acer /ˈeɪsər/) is a genus of trees or shrubs. Sometimes they are made a family of their own, the Average . At other times they are included in the Sapindaceae. To include them in the Sapindaceae is the more modern classification. There are between 100 and 200 species of Maples. Most species are native to Asia, but some also occur in Europe, Northern Africa, and North America.

The word Acer comes from a Latin word meaning "sharp". It was given because of the characteristic sharp points on the maple leaves. The first person to talk about the genus that way was French botanist Joseph Pitton de Tournefort in 1700. The type species of the genus is Acer pseudoplatanus (Sycamore Maple).[1]

The maple's distinctive fruit are called samaras, and known by many children as "helicopters" by the way they spin as they fall. Inside the fruit are found their seeds, which are in pairs. Each one is enclosed in a "nutlet" attached to a flattened wing of papery tissue. They are shaped to spin as they fall and carry the seeds a considerable distance on the wind. One tree can release hundreds of thousands of seeds at a time. Some seeds can remain in the soil for several years before germinating.

What are maples used for?

Maple trees are often planted as ornamental trees in cities. Some species resist the cold rather well. Sugar maples are grown to make Maple syrup. Some maples are grown for timber (wood that is used for furniture). 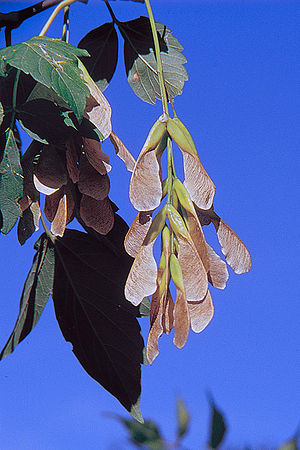 The flag of Canada shows a maple leaf.