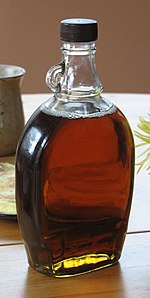 A bottle of maple syrup made in Quebec.

Maple syrup is a thick kind of syrup made from the sap of maple trees. It is made mostly of a type of sugar called sucrose, and is usually eaten together with waffles and pancakes. Sometimes, maple syrup is used to bake things such as pies, to make candy, or just as a syrup that adds sweetness to food. It is also sometimes used in making lemonade. It was used by eastern North America and later by European settlers.[1] Syrups are usually packed when they are hot.[2]