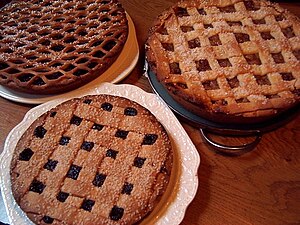 Fruit pies from the Limburg region in the Netherlands

A pie is a way of cooking food. Pies have a pastry crust, either open top or closed top. Pies are baked, and often have a circlular or oval shape. The filling of a pie is either savoury (with meat and/or vegetables) or sweet.

The main idea of a pie is that it is cooked beforehand, often days before it is eaten. The crust keeps it in good condition if kept in a cool place. It may be eaten warm or cold.

Pies are baked with a shell or crust, which is usually made of pastry that covers or completely contains a filling of fruit, meat, fish, vegetables, cheeses, creams, chocolate, custards, nuts, or other sweet or savoury ingredients.

Pies can be either:

Some of these pies are pies in name only, such as the Boston cream pie, which is a cake. Many fruit and berry pies are very similar, varying only the fruit used in filling.

There are many different kinds of pie. People from different countries often have their own different type of pie.

Meat pies with fillings such as steak and cheese, steak and kidney, minced beef or chicken and mushroom are popular in the United Kingdom, Australia and New Zealand as take-away snacks. They are also served with chips as an alternative to fish and chips at British chip shops. People from Wigan are so are known as "Pie eaters"[source?] from their preference for pies. A 'Wigan kebab' is a pie, put between halves of a flour-covered bap (bun). This is called a barm cake. The combination of pie and mash is associated with London. Shepherd's pie (which does not involve pastry) is a favourite amongst people throughout Britain.

In contrast to other meat pies which are served hot, pork pies generally have a very high fat content and may be served cold. These meat pies contain beef and gravy in a shortcrust piecase, often with a flaky top. Many bakeries and specialty shops sell gourmet pies for the more discriminating customer. A peculiarity of Adelaide (a city in Australia) food is the pie floater, where a meat pie is floated in a plate of thick green pea soup.

A slice cut from an apple pie

Pot pies with a flaky crust and bottom are also a popular American dish, typically with a filling of meat (particularly beef, chicken or turkey), gravy, and mixed vegetables (potatoes, carrots and peas). Frozen pot pies are often sold in individual serving size.

Fruit pies may be served with a scoop of ice cream, a style known in North America as '. Apple pie is a traditional choice, though any pie with sweet fillings may be served à la mode. This combination, and possibly the name as well, is thought to have been popularized in the mid-1890s in the United States.[1]

A tourtière is a meat pie originating from Quebec in Canada, usually made with ground pork, veal, or beef.

Cream filled or topped pies are favourite props for humour, particularly when aimed at people who are too serious. Throwing a pie in a person's face has been a staple of film comedy since the early days of the movies, and is often associated with clowns in popular culture. Pranksters have taken to targeting politicians and celebrities with their pies, an act called pieing. Activists sometimes engage in the pieing of political and social targets as well. One such group is the Biotic Baking Brigade. "Pieing" can result in injury to people and pie throwers can face assault or more serious charges.[2]