KidzSearch Safe Wikipedia for Kids.
Jump to: navigation, search
This page is about the food. For the color, see Chocolate (color). 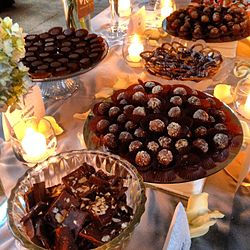 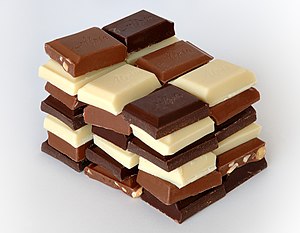 Chocolate is a food made from cacao beans. It is used in many desserts like pudding, cakes, candy, ice cream, and Easter eggs. It can be in a solid form like a candy bar or it can be in a liquid form like hot chocolate. Commercial chocolate has sugar and sometimes milk added.

Dark chocolate has less sugar, and a more bitter taste. It was originally used to make drinking chocolate. Chocolate can also make S'mores.

Chocolate is safe to eat unless it is eaten in large amounts. Some animals, like dogs and cats, become sick even if they eat only a little chocolate.[1] People with diabetes can also get sick from eating chocolate. Dark chocolate contains ingredients that lower blood pressure and fight diseases. Small amounts of dark chocolate have been found to lower the risk of heart disease because of polyphenol in chocolate. It is necessary to moderate the amount of chocolate you eat.[2]

There are a number of ingredients in chocolate. The most notable of these are caffeine and theobromine. These two chemicals are closely related and are found in all cocoa beans. In any bean, the amount of each chemical varies depending on the genetics of the tree and the stresses placed on the tree during the growing season. It takes two hours to make chocolate.

The cacao tree was first found to be useful for its seeds about two thousand years ago. Early Central Americans and Mexicans used the seeds from the cacao tree to make a drink that tasted bitter, not sweet. Only the important people could drink it. The word for "chocolate" in almost every language comes from its name in the Nahuatl language of Mexico, chocolatl.

Later on, this drink was made sweeter and made into what is known today as hot chocolate. It was made popular by Spanish explorers who brought it from North America to Spain.[4] When chocolate was sweetened and made into candy, it became a very popular treat for many Europeans. At first, only the rich could afford chocolate. Now, many people enjoy it. Most cocoa today is made in Africa.

This audio file was created from an article revision dated 2007-10-08, and does not play the most recent changes to the article. (Audio help)
More spoken articles