KidzSearch Safe Wikipedia for Kids.
Jump to: navigation, search
Lua error in Module:Autotaxobox at line 156: attempt to index a nil value.Lua error in package.lua at line 80: module 'Module:Taxonbar/exists' not found.

A potato is a vegetable, the Solanum tuberosum.[2] It is a small plant with large leaves. The part of the potato that people eat is a tuber that grows under the ground.

A potato contains a lot of starch and other carbohydrates. Potato usually has a light-brown or yellowish skin and is white or yellow inside. If the potato gets light on it, the tuber turns green and will be poisonous.[3][4] 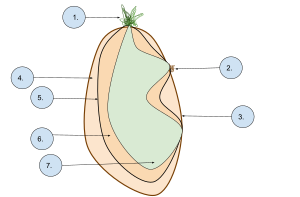 The potato is originally from the high and cool areas of the Andes mountains. It was grown as a food crop thousands of years ago.[5] When Spanish conquistadores came to South America in the 1500s they took potatoes back to Europe.[5]

It took nearly 200 years for the potato to become a widely grown crop. In the 1780s the farmers in Ireland began growing potatoes because they grew well in the poor soils. They also have most of the vitamins that people need to live. When a potato plague destroyed the crop in 1845 the Irish Potato Famine killed many people.[5][6]

The potato plant is now grown in many different parts of the world. Captain William Bligh planted potatoes on Bruny Island, Tasmania in 1792.[7] In Australia they are now the largest vegetable crop.[3]

Scientists in Germany have used genetic engineering to make a potato called the Amflora, which could be grown to make starch for making other things in factories.[15]

William Shakespeare wrote that the potato was an aphrodisiac,[16] but there is no evidence to show this is true.