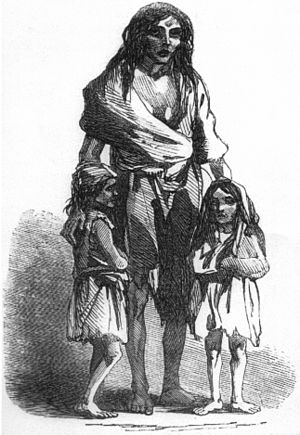 A drawing of Bridget O'Donnell and her two children during the famine.

The Great Famine or the Great Hunger (Irish: An Gorta Mór or An DrochshaolScript error: No such module "Category handler".) is the name given to the famine in Ireland between 1845 and 1849. Outside Ireland, it is usually called the Irish Potato Famine. The Famine was caused by "the Blight", a was a potato fungus which quickly destroyed the potatoes in Ireland. Potatoes were the main source of food for most Irish people at the time.

The effects of The Famine lasted until 1851. Not much is known about what happened during this time. It is believed that between 500,000 and more than one million people died in the three years from 1846 to 1849 because of hunger or disease. Another million became refugees because of the Famine. Many people who left Ireland moved to Great Britain, the United States, Canada and Australia.

In Ireland this time is referred to as the Starvation. The potato was the only crop affected, yet Ireland continued to produce corn, wheat, barley, and beef. However, the English landlords made a bigger profit by shipping these food products out of the country and selling them outside. Writer Chris Fogarty, places the numbers who dies at about 5.16 million. Some legal scholars believe that under International Law, the British pursued a barbarous policy of mass starvation in Ireland from 1845-50, and that such conduct constituted genocide.