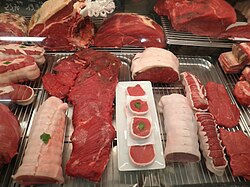 Types of meat include beef, lamb, and pork

Meat is animal tissue used as food. Most often is used to describe skeletal muscle and fat that is found with it. Types of meat include beef and veal from cattle, pork, ham and bacon from pigs, mutton from sheep, venison from deer, fish, insects, and poultry from chickens, ducks and turkeys. The word meat is also used for sausages and for non-muscle organs which are used for food, for example liver, brain, and kidneys.

In the meat processing industry, (in some countries) the word "meat" is to mean only the flesh of mammalian species such as pigs, cattle, etc. but does not include fish, insects and poultry.

Animals such as members of the cat family that mainly eat animals are called carnivores.

Meat is an important part of the diet of many people because it has protein. Protein helps the growth and healing of a body and gives energy. Meat is a "high-protein" food, but costs more than other foods like bread and vegetables.[1] Meat is also a source of B vitamins. People who cannot afford meat, or who do not like to eat it need to find other ways to get enough protein in their diet. Beans and certain nuts are also high in protein, but plant protein might not be as easy to absorb as animal protein.[2] People that choose not to eat meat are called vegetarians, and those who do not eat any animal products are known as vegans.

Red meat is darker-coloured meat (usually form mammals), different from white meat such as chicken or fish. There is a greater risk of diseases and parasites when eating raw meat, but there are some special dishes which are made from raw meat. Examples are steak tartare, sushi, oysters. The meat used in these dishes are usually of high quality.

Due to religious dietary law, halal (حلال) meaning permissible in Arabic is used as a visual marker for Muslims on shops and on products. Likewise kosher for food sourced and prepared according to Jewish tradition.