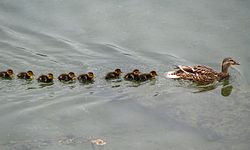 Where she goes, they go: the result of imprinting

Ducks are birds in the family Anatidae. Ducks are closely related to swans and geese, which are in the same family. The main difference is that ducks have shorter necks, and are smaller.

They are not a monophyletic group; the form has evolved several times in the Anatidae. They are what is called a form taxon, defined by what it looks like.

Other swimming and diving birds, like grebes and loons, are sometimes called ducks, but they are not. A baby duck is called a duckling, and a male duck is called a drake. Most ducks are aquatic birds. They can be found in both saltwater and fresh water.

Many ducks are migratory. This means that they spend the summer months in a different place than the winter months. Ducks show a cosmopolitan distribution, they can be found all over the world, except for Antarctica. Some duck species live on the South Georgia and Auckland Islands, which are subantarctic. Many species have established themselves on remote islands, such as Kerguelen or Hawaii.

Some ducks are bred and kept by humans. They are not wild ducks. They are kept to provide food (meat and eggs), or to use their feathers for pillows and other items in the house. Especially in Asia, many people like to eat duck.

Ducks are sometimes kept as pets. They are often kept by groups of people on public ponds for their beauty and calming nature. People commonly feed ducks in ponds stale bread, thinking that the ducks will like to have something to eat. However bread is not healthy for ducks and can kill them.