KidzSearch Safe Wikipedia for Kids.
Jump to: navigation, search
For the storage device, see Write Once Read Many. 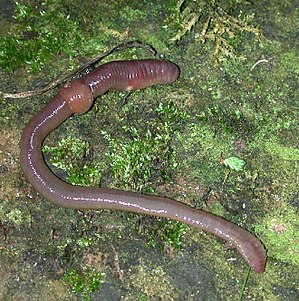 A worm is a type of animal that usually has no arms or legs and has a cylinder-like body. All worms are invertebrates, meaning that they do not have a backbone. Worms can come in many different sizes. Many worm species are so small that they can't be seen with the human eye, while the bootlace worm has been known to grow up to nearly 60 meters (almost 200 feet).[1] One of the most well-known types of worms are earthworms.

There are several subcategories of worms, many of which are very different than others. Annelids, nematodes, platyhelminthes, ribbon worms, arrow worms, priapulid worms, and some insect larvae are all of animals that are often called worms.