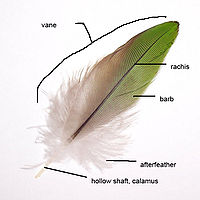 This picture shows the parts of a vaned feather.

When hiding the bittern holds its head vertical so its pattern matches the reeds more closely.

The train feathers of a Blue peacock are an example of display. 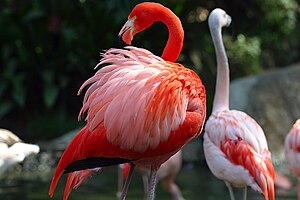 Feathers are the things which cover birds. They help keep birds warm. Feathers also protect them from injury. In most kinds of birds, feathers of wings help them to fly.[1]

The main feathers which cover the outside of a bird are called vaned feathers. Vaned feather have a stiff center, with soft barbs on the side, which seem like hairs. The center is called a quill. This type of feather is called pennaceous (= like a pen).

Young birds have small feathers, called down, which keep them warm, but cannot be used for flying. Down is very soft. Adult birds have down, but also have vaned feathers on top of the down. Down is also used in blankets. Down feathers are just one example of plumaceous feathers (the word means 'fluffy'). Another example is the feathers on flightless birds such as the ostrich.

Birds lose their feathers at certain times. This is called moulting. By moulting, a bird can replace old feathers with new ones. Many birds moult once every year.

Feathers give birds colour. The function of colour in birds is extremely important. It includes:

People use feathers for many purposes. In the past, quills were commonly used as pens, and colorful feathers were worn on hats. Many pillows, cushions, mattresses, coats, and quilts are stuffed with down. Feathers are also used by people of many tribes for decoration.[2]