KidzSearch Safe Wikipedia for Kids.
Jump to: navigation, search
This page is about the food. For the English philosopher and statesman, see Francis Bacon.

A strip of pork bacon. 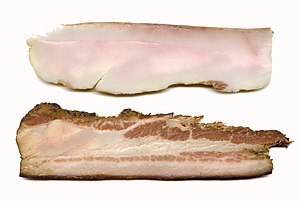 Bacon from the back (above) and belly (below)

Bacon is a type of meat that comes from pigs. It is taken from the sides, back, or belly of the pig. It is often cut in thin slices, unlike other cured or smoked pork products. It is usually fried or grilled. It can also be microwaved.

In the USA, back bacon and smoked ham is sometimes called Canadian bacon.

Bacon has lots of fat. Because bacon comes from pigs, some religions will not eat it. In some cultures and religions (such as Islam and Judaism), eating pork may be considered "unclean." Because of this, other varieties of bacon are also made out of turkey or chicken instead. Turkey bacon and chicken bacon usually contain half of the fat of pork-based bacon.