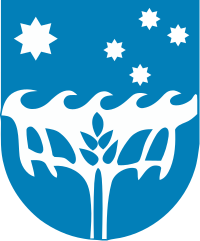 The Territory of Christmas Island is a small island that belongs to Australia. It is in the Indian Ocean, 2600 kms northwest of Perth in Western Australia and 500 km south of Jakarta, Indonesia.

About 1,600 people live on Christmas Island, mostly in a number of "settlement areas" on the north of the island:

Christmas Island is far from other islands. That is why many of the plants and animals are only found on that Island.[1] Much of it is undisturbed by humans.

There used to be mining on the island, but now 65% of Christmas Island is National Park.

Captain William Mynors of the British East India Company ship, the Royal Mary, gave the island its name because they arrived on Christmas Day, 25 December 1643.

There were several visits and explorations of the island, but it was only when valuable phosphate of lime was discovered that the island was annexed to (claimed by) the British Crown on 6 June 1888.

Soon afterwards, a small settlement was started in Flying Fish Cove by G. Clunies Ross, the owner of the Keeling Islands (some 900 kilometres to the south west) to collect timber and supplies for the growing industry on Cocos.

The island was ruled jointly by the British Phosphate Commissioners and District Officers from the United Kingdom Colonial Office through the Straits Settlements, and later the Crown Colony of Singapore.

Japan invaded and occupied the island in 1942, as the Indian garrison mutinied, and they interned the residents (made them stay where they were) until the end of World War II in 1945.

Australia asked the United Kingdom to allow them to rule the island; in 1957, the Australian government paid the government of Singapore £2.9 million in compensation. This amount of money was decided by guessing how much the phosphate given up by Singapore was worth.

The Australian Parliament later passed a law to ban people who arrive on Christmas Island from being able automatically to claim refugee status. This allows the Australian navy to move them to other countries (Papua New Guinea's Manus Island, and Nauru). In 2005, the Department of Immigration began to build an "Immigration Reception and Processing Centre", completed in 2007 at the cost of $210 million. It has 800 beds.

Federal government services are provided through the Department of Transport and Regional Services and the Christmas Island Administration.

The local government is the Shire of Christmas Island. This council has 9 members, half the members are elected every two years.

Christmas Island residents who are Australian citizens also vote in Commonwealth elections for the Northern Territory's Lingiari constituency of the House of Representatives. They are represented in the Senate by Northern Territory Senators.

In early 1986 the Christmas Island Assembly held a design competition for an island flag; the winning design was adopted as the informal flag of the territory for more than ten years, and in 2002 it was made the official flag of Christmas Island.

The annual red crab mass migration (around 100 million animals) to the sea to spawn has been called one of the wonders of the natural world[2] and takes place each year around November; after the start of the wet season and in synchronisation with the cycle of the moon.

The Christmas Island National Park covers 63% of the island. This means that for the visitor interested in plants and animals there is a great deal to see. There is also lots of amazing marine life in the sea.