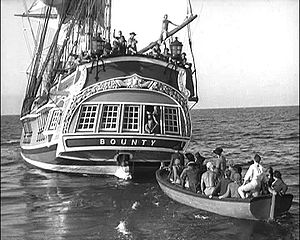 The mutineers put Captain Bligh in a small boat. A scene from the movie, Mutiny on the Bounty

During the Age of Discovery, mutiny meant open rebellion against a ship’s captain. This happened during Magellan’s journey and one mutineer was killed. Another mutineer was executed and 2 others were put on land and left there. After a mutiny on Henry Hudson’s Discovery, Hudson and several others were left in the ocean in a small boat.

Mutiny is still treated as a very bad crime. Mutineers are punished and may even get the death penalty.