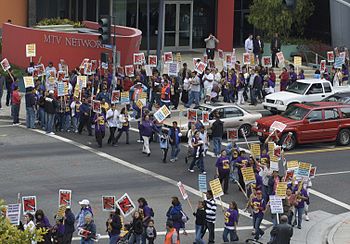 Cleaners striking in front of the MTV building in Santa Monica, California.

A strike action (or simply a strike) is when many workers stop working in protest. Strikes are usually done by a labor union to get better pay, hours, or working conditions. They became important during the Industrial Revolution, when many worked in factories and mines. In many countries, it is against the law to strike. In other countries, people who strike are protected under certain conditions.

The first known strike was in the 12th century B.C., in Egypt. Workers under Ramses III stopped working on the Necropolis until they were treated better.[1] The word gets its name from modern times: in 1768, sailors in London "struck" or removed the sails of trade ships at port.

In 1917, the Mexican Constitution was the first to make sure that workers had the right to strike.

A wildcdat strike is a strike that is not approved by the labor union. Wildcat strikes are not always protected like union-approved strikes are.

A sympathy strike is a strike that is done to support another group of workers on strike.

A slowdown strike is when the workers are still working, but very slowly. It is usually done when workers are not allowed to have a full strike.

A green ban is a strike that is done to get the company to adopt more environmentally friendly practices.

Strikes in the law

Despites, International Covenant on Economic, Social and Cultural Rights ensure the right to strike,[2] many countries do not allow workers to strike at all, but some allow it under certain conditions.

When a strike is called, a government may try to stop it by calling in the police or the military. The threat of force is sometimes enough to get the workers to stop. This happened in the Seattle General Strike of 1919, when over three thousand marines, sailors, and police officers were called into the city by the mayor of Seattle and the Attorney General of Washington.

The owners of a company may also decide to hire new workers. This may cost less than giving into the demands of the workers. This is another way of breaking the strike. These workers, called "scabs" by strikers, are often yelled at as they pass through the picket line. Many unions say that workers who helped break a strike by crossing the picket line are not allowed to be in the union. If the company is a union shop (meaning that only union workers can work there) this means that helping break a strike could get a worker fired from that company forever.