A truck (lorry in British English) is a vehicle used to transport goods. The word "truck" comes from the Greek word "trochos", which means "wheel". They usually use diesel fuel.

Types of trucks by size

Light trucks are trucks the size of cars. They are used by individuals and also companies. In the United States, a truck is a light truck if it weighs less than 6,300 kg (13,000 lb). Light trucks are only a little heavier than vans or pickup trucks, but require a special driver's license.

Medium trucks are heavier than light trucks but lighter than heavy trucks. In the United States, a truck is a medium truck if it weighs between 6,300 kg (13,000 lb) and 15,000 kg (33,000 lb). Trucks that are used for local delivery and public service (dump trucks, garbage trucks) are normally around this size. Medium trucks have usually two axles: one at front and one at rear. The rear wheels may be coupled (that is: two wheels hitched together) to enable heavier load, but they may also be single.

Heavy trucks are the heaviest trucks that are allowed on the road. In the U.K. they are known as lorries. Usually heavy trucks have three axles: one at front and two at rear, and the rear axles have coupled wheels to enable heavy loads. Often heavy trucks pull trailers. They can be either full trailers which have both front and rear axles or boggies and their own brakes, and are connected to the towing truck with a towbar, or semi-trailers, which are attached to a special kind of a truck called tractor unit with a turntable coupling ("fifth wheel"). A semi-trailer is a kind of trailer which has wheels only in the back and the front rides on the back of the tractor unit. The tractor unit has an engine and the semi-trailer does not. Driving a heavy truck requires a professional driver's license. Truck drivers are called truckers.

The largest heavy trucks are the Australian road trains which may have up to four semi-trailers coupled to a tractor in a train-like fashion and may carry up to 200 tonnes of cargo. 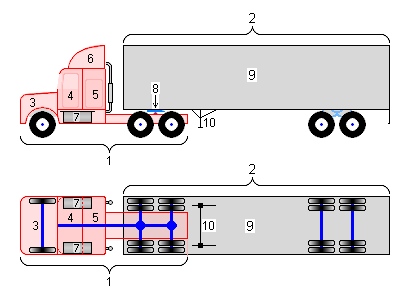 Side and bottom view of an 18-wheel semi-trailer truck with an boxed space for carrying cargo. The bottom view shows the 18 tires (wheels). Parts of the truck are like this:
1. tractor unit
2. semi-trailer (can be taken off)
3. engine space
4. cabin
5. sleeper (not seen in all trucks)
6. wing
7. fuel tanks
8. fifth wheel coupling
9. cargo space
10. landing gear - legs for when semi-trailer is taken off