Execution is where state authorities kill someone for having committed an extremely serious crime, usually treason or especially terrible murders. In most countries where the death penalty is still provided for by law, using it is an option available to the sentencing judge: even if the jury or judicial panel recommends the death penalty, the presiding judge still has the option to lock the convicted person in a prison for the rest of their life. 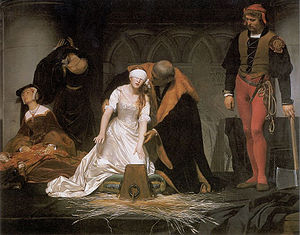 Beheading means cutting the convict's head off. It is one of the oldest execution methods and already mentioned in the Bible. Beheading used to be the standard method of execution in Scandinavia and Germany. Commoners were usually beheaded with an axe and noblemen with a sword. A special device, like guillotine, can also be used, as in France. Nazi Germany used guillotine to execute criminal convicts, such as murderers.

Centuries ago many countries used beheading as an execution for important people, including England. In England, many noblemen and even some kings and queens have been beheaded. There, the prisoner would be led up the scaffold and usually say a speech. Then, he/she would be blindfolded and put his/her neck onto a block. Then, the executioner would lift up his axe and swing it down onto the victim's neck. If the executioner was skilled and the axe was sharp, then the axe would usually cut through the bone and organs of the victim in one stroke. But if the executioner was inexperienced, then it may take many strokes before the head would be cut off.

Other ways of execution 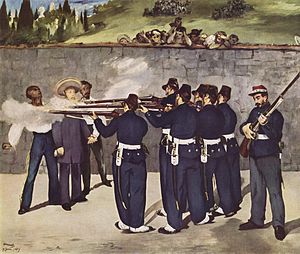 The Execution of Emperor Maximilan of Mexico is a painting by Edouard Manet. It shows a firing squad.