Schutzstaffel  (info • help) (SS) was a large security and military organization controlled by the National Socialist German Workers Party (Nazi Party) in Germany. "SS" was sometimes written in Runic as

, and this symbol was put on the SS flag and insignia.

The SS is created

The SS was created in the 1925 to guard Nazi leader Adolf Hitler. (Schutzstaffel means "Protection Squadron" in German).[1]pp.26-29 From 1929 to 1945, Heinrich Himmler led the SS. During that time, the SS grew from a small paramilitary unit to one of the largest and most powerful organizations in Nazi Germany.[1]p.47

The Nazis saw the SS as a special unit, like the Praetorian Guard (which used to guard Roman emperors).[2] To be chosen for the SS, a person had to be racially "pure". This meant they had to prove that all their ancestors were "Aryan".[3] They also had to be completely loyal to the Nazi party. They could never ask questions or disagree with anything the SS did.[4]

Parts of the SS

The SS had two different parts. The Allgemeine-SS ("General SS") were the Nazis' police. The Waffen-SS ("Armed SS") were special units of soldiers in Nazi Germany's military.[5] The Waffen-SS became known for fierce fighting and brutality against civilians and prisoners of war. Its units helped crush the Warsaw Ghetto Uprising, where Polish Jews tried to fight back against the Nazis.[6] Waffen-SS units also killed many American prisoners of war during the Battle of the Bulge in 1944.[7][8]

The SS was militaristic but not military. It had its own rank system, insignia, and uniforms. This made the SS different from the German military, the Nazi party, and people who worked in the German government.[9]

As the Nazi party gained more and more power in Germany, it gave control of more important jobs (like law enforcement) to the SS. Many SS organizations became as powerful as parts of the government. The Nazi party decided that to help it keep its power, it needed to give the SS two even more important jobs. One of these was to create and run the Sicherheitsdienst (SD), the Nazi security and intelligence service. The other was to control the Geheime Staatspolizei (Gestapo): the SS secret police.[10] Because it was in charge of so many important things, the SS could do almost anything it wanted.[11] 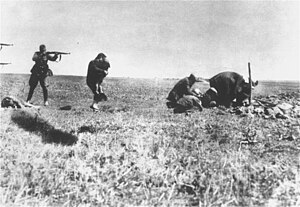 The SS Einsatzgruppen murdered many civilians, including this woman, who is trying to protect her child with her body just before being shot

Role in the Holocaust

As the SS's leader, Heinrich Himmler used the SS to put the Final Solution into action.[12] The SS Einsatzgruppen murdered many civilians, mostly Jews, in the countries controlled by Nazi Germany during World War II.[13] The SS was in charge of creating and running concentration camps and death camps (camps where people were sent to be killed).[14] In these camps, millions of prisoners died from many causes, including murder, starvation, disease, freezing to death, and being experimented on by Nazi doctors like Josef Mengele.

After the war, the judges at the Nuremberg Trials decided the SS was a criminal organization (a group that was created only to commit crimes). They ruled that the SS had committed war crimes and crimes against humanity. They also said that the SS was the organization that had carried out most of the Holocaust.[15][16]