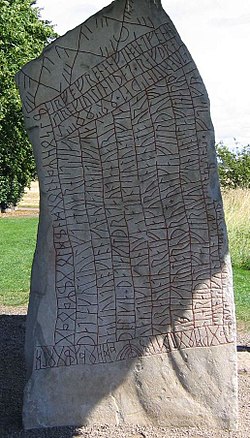 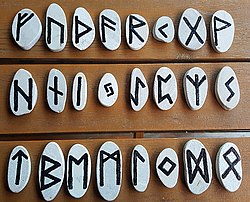 Runes are very old letters which Germanic people used before they started using Latin letters in the Middle Ages. In its broadest sense, the word runes can mean any cryptic letters, but it usually means the alphabets used by Scandinavian people from about the year 150 CE to the Middle Ages. The oldest of these is called the Elder Fuþark, used from about 150 to 800 CE. Around the year 800 the runes changed into the Younger Fuþark, and these were used until about 1100, when the Latin alphabet replaced them. The Anglo-Saxon runes were used about the same time (400-1100) in Britain. The Scandinavian runes are called "Fuþark" because the first six letters in the runic alphabet are ᚠ ᚢ ᚦ ᚨ ᚱ ᚲ (F U Þ A R K). The Anglo-Saxon runes are called "Fuþorc" because they are a little different.

Runes are found carved into stones (called runestones) in many places in Scandinavia (Denmark, Norway and Sweden), and in the British Isles, Iceland, Greenland, the Faroe Islands and Frisia. Runes have been used for writing poems and eulogies, and they are still sometimes used to write ciphers. Runes were also used by J. R. R. Tolkien in his fantasy works, which were based on Germanic mythology. Because of their association with Germanic mythology, runes were also used by the Nazis to support a new mysticism and a romantic sense of Germanic heritage. The rune ᚦ survived into the Middle Ages in the English language and to modern times in Icelandic as the letter þ (pronounced "th" as in thing). After the Norman conquest, this letter was replaced by the letters th because it was unknown to the French-speaking Normans. Similarly, the letter ð (pronounced "th" as in this) was used in Old English and is still used in Icelandic, but it is from Irish, not from the runes.

When the runes were first used, the Germanic languages were not yet split into their modern branches; there was only one unified language (called Proto-Germanic) with many regional dialects. Each rune had a name, like our modern letters have names, but these very old names are no longer known. By their association with later letters, the old names of the runes have been reconstructed. The [*] before a rune's Proto-Germanic name means this is a reconstructed name. Not all runes were drawn the same way, however, and some of the runes and their names were different in some places.