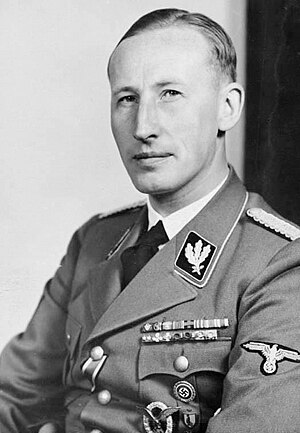 In 1922 he joined the Kriegsmarine, the German Navy. In 1931 he was expelled and got a job with the Nazis.

Heydrich became German SS-Obergruppenführer (General) of the Sicherheitsdienst.[1] He was the head of the RSHA, which included the police and the Gestapo.[2] He was one of those responsible for the Holocaust.

In 1941 Hermann Göring gave Heydrich the order to arrange the "Final Solution". Heydrich also governed Bohemia and Moravia. He was attacked in Prague on 27 May 1942 byCzech and Slovak soldiers trained by the British Special Operations Executive (SOE). They had been sent (with a small support team) by the Czechoslovak government-in-exile. Heydrich died a week later in hospital from sepsis caused by his injuries. Afterwards the Germans killed the male population of the village Lidice, because the Germans accused that the people in the village helped the assassins.