Hermann Wilhelm Göring (12 January 1893 in Rosenheim, Upper Bavaria, Bavaria, Germany – 15 October 1946 in Nuremberg, Middle Franconia, Bavaria, Germany) was a German politician and military leader of Germany. As second in command after Hitler, he was one of the most powerful leaders of the Nazi Party (NSDAP).[4] Between 1932 and 1945, he was President of the German Reichstag and also a minister of the Third Reich, under Adolf Hitler. In the Second World War, he was the Commander-in-Chief of the German air force.[4] Göring was responsible for the creation of the concentration camps and the Gestapo, the Nazi secret police, which he handed over to SS chief Heinrich Himmler. In 1941, he gave Reinhard Heydrich the order to arrange the Final Solution to kill millions of Jews and Poles.

Göring was one of the 25 people charged at the Nuremberg Trials. The court decided he was guilty. The judgment on 1 October 1946 said that he was to be hanged, but he killed himself by swallowing a tablet of cyanide a few hours before he could be executed.[5] 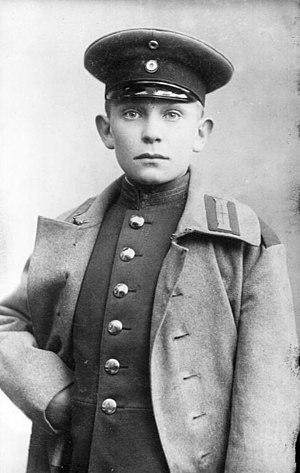 He spent the first three years of his life at the home of a friend of his mother, because Göring's father was in Namibia.[6] From 1901, he lived at his godfather Hermann von Epenstein mansion. Hermann's mother had an affair (a romantic relationship with someone other than her husband) with von Epenstein.[8] He attended the grammar schools in Fürth and Ansbach. In the games he played as a child, the story was always about war.[9]

In 1905, he went to a military school in Karlsruhe. He got his Abitur, and an officer exam, in 1912. He then went to the Bavarian Prinz Wilhelm Regiment (112th Infantry) in Mulhouse.[10]

When the First World War started, Göring had the rank of Lieutenant. He had served in the infantry. In 1915, because of his rheumatism, he had to go to a hospital. His friend, Bruno Loerzer, got him to join the air force. In France, he flew as an observer, a person who looked for targets and enemy planes. Because of this, he was awarded the Iron Cross First Class in 1915.[11] In 1916, he was trained to fly a plane. On 14 March 1916, he shot down his first bomber. In 1917, he became the leader of the 27th Flying Group.[11] In 1918, after he shot his 19th plane, he was awarded the Pour le Mérite (also called "The Blue Max"). This was the highest air force award in Germany.[12] After the death of Manfred von Richthofen, he became the leader of the flying group "The Red Baron".[11]

Between 1919 and 1921, Göring worked as a stunt pilot in Scandinavia. In November 1922, he met Adolf Hitler and later became a member of the National Socialist German Workers' Party (NSDAP).[11] Göring married Carin in Stockholm on 3 February 1923.[13] In 1923 he was leading the SA (Oberste SA-Führer), and he took part in the Beer Hall Putsch and was wounded. After this, he went to Austria. Because of pain, a doctor injected him with morphine but he became dependent on it.[14] Between 1925 and 1926, he had two treatments in Sweden at the Långbro mental hospital. He came back to Germany in 1927.[15] In 1928, he became a member of the Reichstag of the Weimar Republic.[16] He was a member of the Reichstag until the end of the Second World War.[11] In 1932, the NSDAP became the most powerful party of the Reichstag. Göring then became president of the Reichstag.[15]

Göring during the Third Reich 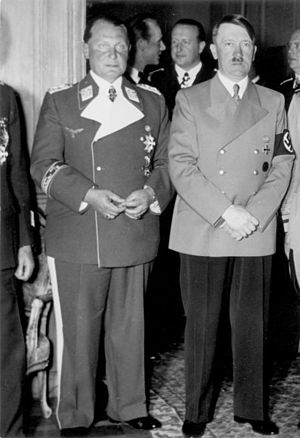 When Hitler became chancellor of the Weimar Germany in 1933, he made Göring a minister of the Reich without a specific area of responsibility. This means that he was not the head of a ministry. In April 1933, he was made minister president of Prussia. Then, on 30 August 1933, he was made a General by Paul von Hindenburg.[11] Between 1934 and 1935 he became minister of several agencies. His wife had died in 1931, and in 1935 he married Emmy Sonnemann in Berlin. In 1936, he sent the German Condor Legion to Spain to help Francisco Franco. After the Kristallnacht in 1938, he was in charge of removing Jewish businessmen from the German economic system.[15] During Second World War, his biggest defeat was the loss of the air battle against Great Britain.[15] Hitler named Göring to be his successor if he died in 1939.[17]

In 1940, he was made Reichsmarschall (Marshal of the Empire) by Nazi leader, Adolf Hitler.[14][17] In 1941, Göring ordered Heydrich to make a plan for the Holocaust.[18] In 1942, he gave Fritz Sauckel the order to use the Russian population for industry-work. In 1943, Göring had an expensive birthday party for his 50th birthday.[11] On 20 April 1945, he left Hitler's birthday party and went to Berchtesgaden. He told Hitler that he had very important things to do in south Germany.[19] From Berchtesgaden, Göring sent a telegram to Hitler in Berlin. In the telegram Göring asked about taking over the affairs of state.[11] Towards the end of the war, after the telegram, he started to talk with the Allies. Because of this, Hitler wanted to put Göring in prison. Göring then went to the Americans.[15]

On 29 April 1945 Hitler removed Göring from all his offices, stripped him off his party membership and ordered his arrest. He wrote this down in his testament.[20]

Göring surrendered in Bavaria on 9 May 1945. The Nuremberg Trials started on 20 November 1945. [21] On 18 March 1946, Göring was questioned by the Allies.[22] After this, he was imprisoned in Nuremberg. He was the third-highest-ranking Nazi official tried at Nuremberg. Only Reich President (former Großadmiral) Karl Dönitz and former Deputy Führer Rudolf Hess had higher ranks than Göring. The judges decided he was guilty. Because of this on 1 October 1946 the court reached a verdict that he was to be hanged. One day before he was to be hanged, he committed suicide by taking a tablet of cyanide. It is not known how Göring got the cyanide or how long he hid it but there was a claim that he was given it by an American soldier who was in love with a German woman who was in touch with him.[23][24] It is not known if this is the truth.