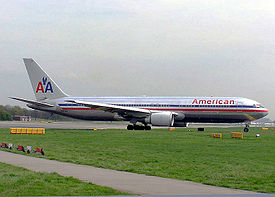 A steam-powered unmanned fixed-wing aircraft, that weighed 9 lb (4.1 kg),[3] was built by John Stringfellow, in Chard, Somerset, England in 1848. It could fly by itself without needing to be dropped from high up. There were gliders before this, but they had to fly by being pushed off a building or hill.

The first man who flew (took off, steered, and landed) a motor-powered aircraft was Orville Wright in 1903 in Kitty Hawk, North Carolina, USA.[4]

Advances in technology have made fixed-wing aircraft more efficient. Things like winglets and more efficient turbofans have helped to do this.

Most fixed-wing aircraft have certain parts in common.

Fixed-wing aircraft have long been used as airliners for moving passengers from place to place. Cargo aircraft carry cargo across seas and long distances, and passenger aircraft also carry some cargo.

The first aircraft for war bombing was used in Libya in 1911 by Italy against the Ottoman Empire. Some fixed-wing aircraft are used by air forces to defend countries. These may be fighter aircraft, using guns or missiles for combat with other aircraft. They may be bombers, dropping bombs on ground targets.

Fixed-wing aircraft allow people to travel longer distances, and faster than ships or trains. Aircraft can fly from New York to London in about 7 hours. It would take one week or more on a ship. Militaries use airplanes to carry their soldiers quickly from place to place.

Airplanes are also used by the military to see many things on the ground easily. This is called surveillance or reconnaissance. Often, fixed-wing aircraft will take photographs as well, which can be used for military planning later.

Statistics show that riding in a plane is safer than driving in a car.[5]