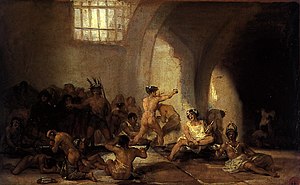 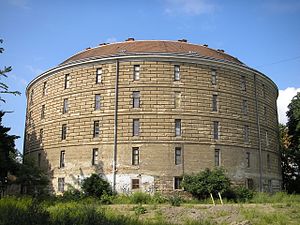 The Narrenturm in Vienna (translates to fools' tower) was the first specialised building to lodge mentally ill patients. It was built in 1784. It is a museum of medical history today.

A psychiatric hospital is a place where mentally ill people are kept so they can be treated.

Psychiatric hospitals used to be called lunatic asylums. Earlier asylums like the old Bethlem Royal Hospital in London (nicknamed "Bedlam") were like prisons. Patients received no treatment and were often imprisoned and chained. In the 19th century, new asylums were built. These were designed to be pleasant places with gardens and airy rooms, and later became known as psychiatric hospitals. Although they no longer looked like prisons, patients still had little freedom or hope of leaving. The term institutionalisation means when someone has lived in a hospital (or some other place like a prison) for so long that they cannot cope with living outside of it.

In the middle of the 20th century, new drugs were invented that made it easier to treat mental illness. Governments began to look for ways to care for patients outside of hospitals. They believed it would lead to better care for patients and save money. This is known as deinstitutionalisation. Since the 1970s, many countries have closed large numbers of psychiatric hospitals. Mentally ill patients are now also cared for in local hospitals, small clinics and in their own homes.

This short article about medicine can be made longer. You can help Wikipedia by adding to it.