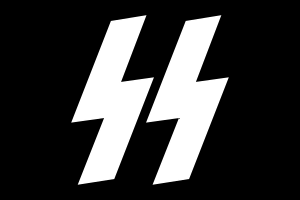 A postage stamp of 1943. It shows the troops of the Waffen-SS, as propaganda.

The Waffen-SS was part of the SS. Waffen is a German word meaning "Arms". The Waffen-SS was a paramilitary organisation within the SS. The divisions of the Waffen-SS were positioned as elite troops. Their original task was to protect higher-ranking personnel of the SS and the NSDAP. Together with people from the SA they were used as a police force. The Waffen-SS was officially an auxiliary police force on the streets. In 1937, some troops were reorganised. Those parts of the SS that had the primary function to guard and operate Detention Camps were re-organised as SS-Totenkopfverbände. Experiments on humans, as they were done in KZ Buchenwald and other detention camps were led by doctors of the Waffen-SS.

They were led by Heinrich Himmler. After the World War II, they were found guilty of crimes against humanity, and the SS was dissolved.

Divisions of the Waffen-SS

The Waffen-SS was grouped into divisions, as follows:

The differences to the normal army units were as follows:

Some of the supposed crimes, the Waffen-SS committed

One of the strangest SS units was the British Free Corps. It was a unit of the Waffen SS during World War II consisting of British and Dominion prisoners of war. It consisted of about 27 men. One British soldier who helped recruit soldiers was John Amery. After the war he was sentenced to death for high-treason. He was then executed.

After the end of the war, all troops were disbanded. In 1951, the Hilfsgemeinschaft auf Gegenseitigkeit der ehemaligen Angehörigen der Waffen-SS was founded, in Germany. This translates to Mutual support organisation of former members of the Waffen-SS'. In English it is better known by HIAG. What they wanted is to have equal treatment of soldiers of the Waffen-SS, and soldiers of the Wehrmacht, the regular troops. They also publish a magazine. This (like most other such magazines), tries to convey the image that Waffen-SS troops were normal troops, after all. Sometimes, there are also revisionist articles in it.