Einsatzgruppen were a paramilitary group in Nazi Germany. They were part of the Schutzstaffel (SS). They helped make The Holocaust happen by murdering about 12 million people throughout Europe. Almost all of the people they killed were civilians.

Most of the people the Einsatzgruppen killed were Jews. They killed between 5 and 6 million Jews.[1]p. 257 However, they also killed hundreds of thousands of Polish people, Soviets, and Roma people in Eastern Europe.

From September to December 1939, the Einsatzgruppen took part in the Nazis' Action T4 program. The Nazis believed that people with physical, intellectual, and mental disabilities did not deserve to live. Action T4 was a plan to kill them all. At first, the Einsatzgruppen and other Nazis shot these people. However, by spring of 1940, the Nazis started using gas chambers so they could kill people with disabilities more quickly.[5]pp. 138–141

In 1939, Hitler decided to invade Poland. Heydrich decided the Einsatzgruppen would follow the regular German Army.[4]p. 425 Their job would be to kill the most important people in Polish society, like clergy, teachers, and members of the academia. They would also kill anyone who refused to agree with Nazi ideas or rules.[5][6]p. 144 Adolf Hitler said: "...there must be no Polish leaders; where Polish leaders exist they must be killed[.]"[5]p. 143 The Einzatsgruppen followed this plan by killing about 65,000 civilians by the end of 1939. These people included Polish leaders, Jews, prostitutes, Roma people, and people with mental illnesses.[4][7]pp. 430–432

Finally, the Einsatzgruppen forced the surviving Jews in Poland to move to ghettos in big Polish citiies. The Nazis planned to get rid of all the Jews in Poland, but they had not yet decided where to send them.[8]pp. 227–228, 242-245 With the help of the German Army, the Einsatzgruppen also forced tens of thousands of Jews eastward into the part of Poland that the Soviet Union had taken over.[4]p. 429

In 1941, Hitler decided to invade the Soviet Union. He called this plan Operation Barbarossa. Hitler hated communism. He wanted to take over the communist Soviet Union, and kill communism for good.[9]pp. 95–96

In June 1941, Heinrich Himmler, the leader of the SS, told other SS leaders that the Nazis planned to kill up to 30 million people in the Soviet Union. The Einsatzgruppen would play an important part in this by murdering people who the Nazis thought were inferior. However, the Nazis would also use other strategies, like starvation, to kill other Soviets.[5]p. 181

The Einsatzgruppen did these jobs in many ways. Sometimes, they would make lists of people who they thought were enemies, and would then murder them. Other times, they would perform massacres of thousands of people over a few days. For example, at Babi Yar, one Einsatzgruppen battalion killed 33,771 Jews in two days; in the Rumbula massacre, another killed about 25,000 people in two days.[11][12]

As the Nazis took over more and more countries, they created more Einsatzgruppen. They also created smaller groups called Einsatzkommando and Sonderkommando. These included:

Killings in the Soviet Union

Between July 8 and July 17, Heydrich also ordered the Einsatzgruppen to kill:

The Red Army retreated. However, Heydrich thought there were Soviet guerrilla fighters still in the area and thought local Jews were helping them. He ordered the Einsatzgruppen to encourage anti-Jewish pogroms in the newly occupied territories.[21] Pogroms (some of which the Einsatzgruppen started) broke out in Latvia, Lithuania, and Ukraine.[4]p. 526 Within the first few weeks of Operation Barbarossa, 10,000 Jews were killed in 40 different pogroms. By the end of 1941, about 60 pogroms had happened, killing up to 24,000 people.[4]p. 526

All of the main Einsatzgruppen took part in mass shootings from the beginning of the war.[5]pp. 196–202 At first, they shot only adult Jewish men. However, by August, they were shooting all Jews, including women, children, infants, and the elderly. At first, they killed people in firing squads. When this became too slow, the Einsatzkommandos began to shoot larger groups next to, or even inside, mass graves.[5]p. 207 As news about these killings spread, many Jewish people ran away.

The Nazis began to send people to concentration camps and ghettos. Rural areas were mostly Judenfrei (free of Jews).[5]pp. 211–212 The Nazis created forced labour gangs so they could make use of the Jews as slaves until the Nazis had killed them all. The Nazis had put off that goal until 1942.[5]pp. 212–213

Killings in the Baltic States

Einsatzgruppe A worked in the Baltic States of Estonia, Latvia, and Lithuania. These countries had been occupied by the Soviet Union before the Nazis took them over. Einsatzgruppe A killed about 140,000 people between June and November 1941.[9]p. 98

When Einsatzgruppe A entered Kaunas, Lithuania, a pogrom was happening. They let all of the criminals out of jail and encouraged them to join the pogrom. In four days, 4,000 Jews were killed in the pogrom.[1]p. 41

Groups like the Arājs Kommando were created in Lithuania and Estonia too. With their help, Einsatzgruppe A was able to kill almost every Jew in its area.[10]p. 182

In November 1941, Himmler decided that Latvians were not being killed fast enough. He wanted to move Jews from Germany into Latvia. He ordered that everyone living in the ghetto in Riga, Latvia, be murdered.[1]pp. 206–209

The Nazis told the people in the ghetto they were being sent to another place to live. They told them to bring their things and valuables.[1]pp. 208–210

The Nazis moved people towards a nearby forest a thousand at a time. They shot people who tried to run away or could not walk fast enough. They took the things the Jews had brought with them, and made them take off their clothes. Then, fifty at a time, they made the victims lie down in a mass grave and shot them.[1]pp. 208–210 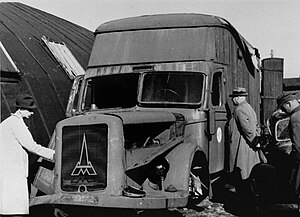 After a while, Himmler realized that the Einsatzgruppen's methods were not the best way to kill people as quickly and cheaply as possible.[10]p. 197 He also found that many Einsatzgruppen had trouble killing so many people. Some had physical and mental health problems, and others became alcoholics.[1]pp. 52, 124, 168 Himmler made a final decision after watching a mass execution in August 1941. He decided that shooting Jews was too stressful for his men.[4]pp. 547–548

Himmler decided that the answer to this problem was to kill Jews (and others) with poison gas.[1]p. 167 Starting in 1942, all of the main Einsatzgruppen began killing people using gas vans, which had been used to kill people with disabilities early on in Action T4. In these vans, carbon monoxide exhaust fumes from the vans' engines were pumped into the back of the truck, killing the victims inside. However, by September 1941, Nazis at Auschwitz concentration camp had begun experimenting with Zyklon B, a cyanide-like pesticide.[5]pp. 280–281

At the Wannsee Conference on January 20, 1942, the Nazis officially decided to kill all of the Jews in Europe (11 million people). Some would be worked to death. Others would be killed in extermination camps (death camps).(German: Die Endlösung der Judenfrage).[4]p. 555-556 The Nazis created death camps like Auschwitz-Birkenau and Bełżec extermination camps with the goal of killing as many people as possible, as quickly as possible. These death camps replaced the Einsatzgruppen as the Nazis' main strategy of mass murder and genocide.[5]pp. 279–280

At first, the Einsatzgruppen were sent to fight partisans – people in Nazi-occupied territories who continued to fight back against the Nazis.[1]p. 248 However, by 1944, most Einsatzgruppen had become part of Waffen-SS fighting units or sent to guard death camps. 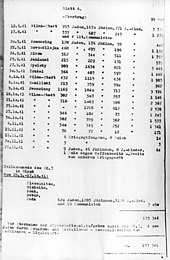 The Einsatzgruppen kept careful records of their mass murders so they could write reports to their supervisors. The Commander of Einsatzgruppe A filed the Jäger Report on December 1, 1941. it talks about Einsatzgruppen A's actions in Lithuania.

In February 1942, Jäger changed his estimates of how many people the Einsatzgruppen killed. He said there were 138,272 victims, including:[1]p. 126