A drawing from 1883, showing the problems of alcoholism; the drawing is called at her feet

Alcoholism is the medical condition of people who often drink too much alcohol. Some people who suffer from alcoholism feel that they have to drink alcohol, even when it causes health and social problems. Alcoholism means addiction to alcohol. People who suffer from it are called alcoholics. As the condition goes on, those who suffer from it change their habits: obtaining alcohol and consuming it becomes more important. Very often, other interests disappear. Many alcoholics do not think they have a problem with drinking alcohol. With time, they better support bigger quantities, and their personality changes.

Medically, there are two different conditions:

According to the World Health Oranization, there are approximately 140 million people with alcoholism worldwide.[1][2] In the United States and Western Europe, ten to twenty percent of men and five to ten percent of women at some point in their lives will meet criteria for alcoholism.[3]

Alcoholism is called a "dual disease": There are both mental and physical components.[4] The biological mechanisms that cause alcoholism are not well understood. Social environment, stress,[5] mental health, family history, age, ethnic group, and gender all influence the risk for the condition.[6][7] Consuming large amounts of alcohol produces changes in the brain's structure and chemistry. Some changes occur very early, even when small amountas of alcohol are consumed, in a short time. Examples are tolerance and physical dependence. Because of the changes, it is very difficult for an alcoholic to stop drinking, as this would result in alcohol withdrawal syndrome if the person stops.[8] Alcohol damages almost every organ in the body, including the brain. Chronic alcohol abuse can cause both medical and psychiatric problems.[9]

Alcoholism is a condition with a social stigma. As a result, people suffering from it, avoid being diagnosed or treated, as this may be shameful, or have social consequences. The evaluation responses to a group of standardized questioning is a common method for diagnosing alcoholism. These can be used to identify harmful drinking patterns, including alcoholism.[10] In general, problem drinking is considered alcoholism when the person continues to drink despite experiencing social or health problems caused by drinking.[11] 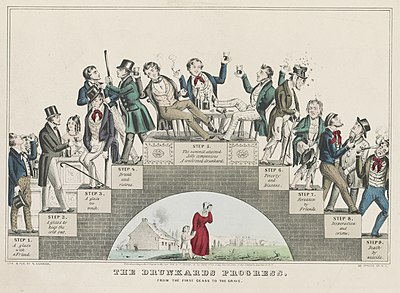 The drunkards progress, an illustrationfrom 1846: The stages:
Step 1. A glass with a friend.
Step 2. A glass to keep the cold out.
Step 3. A glass too much.
Step 4. Drunk and riotous.
Step 5. The summit attained. Jolly companions. A confirmed drunkard.
Step 6. Poverty and disease.
Step 7. Forsaken by Friends.
Step 8. Desperation and crime.
Step 9. Death by suicide.


Generally, there are different stages to alcoholism.

The overuse of alcohol has different causes, and there are different forms of treatment available. Some of these treatments are:

Treatment of alcoholism takes several steps. Direct withdrawal leads to medical problems. For this reason, the process of withdrawal needs to be controlled carefully. Alcohol detoxification often involves the use of special drugs; benzodiazepines such as diazepam are used frequently.[12] Sometimes, people with alcoholism also have other addictions. Benzodiazepines are addictive. If the person is addicted to both alcohol, and benzodiazepines, this step gets more complicated.[13] After detoxification, other support such as group therapy or self-help groups are used to help the person remain sober.[14][15] Thombs (1999) states according to behavioural sciences alcoholism is described as a “maladaptive behaviour”. He explains this must not be confused with “misbehaviour”. Behavioural scientists explain that addicts have a behaviour pattern that may lead to destructive consequences for themselves, their families and society. This does not label addicts as bad or irresponsible.[16] Compared with men, women are more sensitive to alcohol's harmful physical, cerebral, and mental effects.