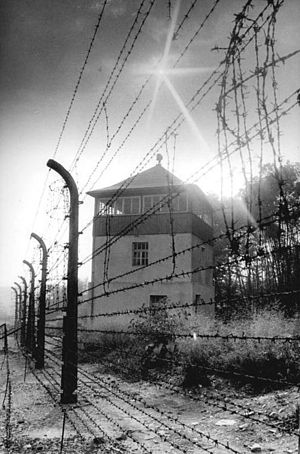 Watchtower at the memorial site Buchenwald, in 1983

The Nazis sent people from all over Europe and the Soviet Union to Buchenwald. There, they were prisoners and did forced labor in weapons factories.[1]

After the Allies won World War II, the Soviet Union took over Buchenwald and some other parts of Germany. From 1945 to 1950, they used Buchenwald as an internment camp. They called it NKVD Special Camp Number 2. (The NKVD was the Soviet police organization that ran the camp.) On January 6, 1950, the Soviets handed over Buchenwald to the East German Ministry of Internal Affairs.

Today, what is left of Buchenwald is a memorial. There is also a museum there.[2]

The Nazis built Buchenwald on the Ettersberg (Etter Mountain), near Weimar, Germany, in July of 1937. They named the camp Buchenwald, which means "beech forest" in English.[3] On the camp's main gate, they wrote Jedem das Seine ("Each to their own”).

Between April 1938 and April 1945, about 238,380 people were sent to Buchenwald. These prisoners included people from many different countries. They also included many Allied prisoners of war (POWs). Over 56,000 prisoners died at Buchenwald.[4]

Buchenwald’s first commandant (camp leader) was Karl-Otto Koch. He ran the camp from 1937 to July 1941. His second wife, Ilse Koch, became well known as Die Hexe von Buchenwald ("the witch of Buchenwald") for the terrible ways she treated the prisoners. Koch made the prisoners build a zoo at Buchenwald, with a bear pit (Bärenzwinger).[5]

Eventually, Koch was put in prison at Buchenwald himself. At first, two Nazi officials named Prince Waldeck and Dr. Morgen accused Koch of encouraging murder. Later, Koch was also charged with corruption, embezzlement, black market dealings, and using the camp's workers to meet his own needs.[6] Other camp officials were also charged, including Ilse Koch.

Karl Koch was tried and sentenced to death. He was executed by a firing squad on April 5, 1945. This was just one week before American soldiers arrived and took over Buchenwald.[7]

After the war, Ilse Koch was sentenced to four years in jail. At first, her sentence was cut down to two years and she was set free. However, after this, she was arrested again and sentenced to life in prison by the new German government. She killed herself in jail in September 1967.[6]

Buchenwald's second commandant was Hermann Pister. He controlled the camp from 1942 to 1945, when it was taken over by American soldiers.

After the war, Pister was tried in the Nuremberg Trials, and was sentenced to death. However, in September 1948, before he could be executed, Pister died of a heart problem.[6]

The Nazis sent prisoners from all over Europe and the Soviet Union to Buchenwald. These included:

Somewhere between 500 and 1,000 women prisoners were kept at Buchenwald. First, in 1941, twenty female political prisoners were brought to Buchenwald from Ravensbrück concentration camp. They were forced to work as sex slaves in the camp's brothel.

When the Nazis captured soldiers from Western Allied countries, they almost always sent them to prisoner of war camps, not concentration camps. However, they did keep a group of 168 airmen (flyers) at Buchenwald for two months.[9] These men were from the United States, the United Kingdom, Canada, Australia, New Zealand, and Jamaica. They got to Buchenwald on August 20, 1944.[10][11]

These airmen's planes had crashed in France, which Nazi Germany controlled. The airmen were sent to Buchenwald, not a POW camp, because the Nazis said they were spies and "terror bombers."

After the war, one airman remembered arriving at Buchenwald:

As we got close to the camp and saw what was inside... a terrible, terrible fear and horror entered our hearts. We thought, what is this? Where are we going? Why are we here? And as you got closer to the camp and started to enter [it] and saw these human skeletons walking around—old men, young men, boys, just skin and bone, we thought, what are we getting into?
—

The Nazis' goal for camps like Buchenwald was Vernichtung durch Arbeit ("extermination through labor"). This meant that prisoners were being sent to Buchenwald to be worked to death.

Because of the terrible living conditions in the camp, illness was very common and spread quickly. Prisoners were also starving. Because of this combination of illness and starvation, many prisoners were actually "worked to death" as the Nazis had planned. However, many other inmates died from executions, experiments by Nazi doctors, and other causes.

Prisoners from Buchenwald waiting to be executed in the forest near the camp, April 26, 1942

Summary executions of Soviet POWs (executions without a trial) were also done at Buchenwald. In 1941 and 1942, at least 1,000 men were chosen to be killed and were sent to Buchenwald, where they were immediately shot in the back of the head.

Nazi doctors also did experiments on prisoners at Buchenwald. For example, in 1942 and 1943, they used 729 prisoners to test a vaccine for typhus. This meant the prisoners were given the vaccine, and then given typhus on purpose. 154 of these prisoners died.[14] In another experiment, Nazi doctors wanted to see how much of a certain poison was needed to kill a person. They gave four Russian POWs the poison. When the POWs did not die, they were "strangled in the crematorium" and then "dissected" (cut apart to study their bodies).[14] Doctors also burned other prisoners very badly with white phosphorus to test whether a medicine would help similar wounds caused by bombs.[14] After the war ended, at the Nuremberg Trials, one of these doctors defended himself by saying that while he was a doctor, he was also a "legally appointed executioner" (meaning the law allowed him to kill people).[14] 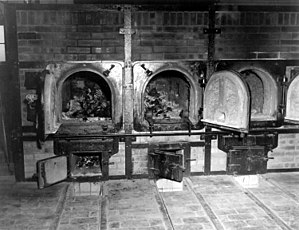 The SS left behind records of how many prisoners came to the camp and how many left. They recorded how many prisoners were let go, sent to another camp, or died. These records say that 33,462 prisoners died at Buchenwald. However, these records may not be completely true. For example, before 1944, when the SS killed prisoners, they often wrote down that the prisoners were "transferred to the Gestapo," not that they were killed. Also, starting in 1941, many Soviet POWs were executed in mass killings. These POWs would be killed as soon as they got to the camp, and were never added to the camp's records. This means they were not listed among the 33,462 dead.[4]

When all these deaths are added up, the total number of people who died at Buchenwald is about 56,545.[15] This number includes: 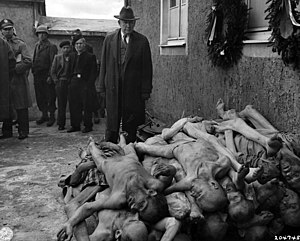 On April 4, 1945, United States soldiers took over Ohrdruf, one of Buchenwald's smaller camps. Ohrdruf was the first Nazi camp liberated (taken over and freed) by U.S. soldiers.[17]

Two days later, the Nazis started trying to evacuate (move everybody out of) Buchenwald. They made thousands of prisoners go on forced marches toward other camps that the Americans had not yet reached.[8]

A Polish engineer named Gwidon Damazyn, who had been a prisoner since March 1941, had set up a secret short-wave radio. On April 8 at noon, Damazyn and Russian prisoner Konstantin Ivanovich Leonov sent a message in Morse code to the Allies. The message had been written by the leaders of the prisoners' underground resistance movement (a group of prisoners who tried to fight the Nazis in secret). It said:

To the Allies. To the army of General Patton. This is the Buchenwald concentration camp. SOS. We request help. They want to evacuate us. The SS wants to destroy us.

The text was repeated several times in English, German, and Russian. Damazyn sent the English and German messages, and Leonov sent the Russian version. Three minutes after Damazyn sent the last message, the headquarters of the Third United States Army answered:

KZ Bu. Hold out. Rushing to your aid. Staff of Third Army.

Damazyn fainted after getting the message.[18]

After learning this news, Communist inmates attacked the camp's watchtowers and killed the guards who were still at the camp. They used guns they had been collecting since 1942 (one machine gun and 91 rifles).[19]

United States soldiers arrived at Buchenwald on April 11, 1945 at 3:15 P.M. (The clock at the entrance gate is now permanently set to this time). The soldiers were given a hero's welcome.[20]

Later that day, United States soldiers took over Langenstein, one of Buchenwald's smaller camps. There, they freed over 21,000 prisoners.[20] They also ordered the mayor of Langenstein to send food and water to the camp, and rushed in medical supplies from an American field hospital.[21] 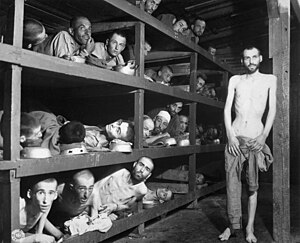 Buchenwald, 1945. Elie Wiesel is in the second row from the bottom, seventh from the left.

On Thursday, April 12, 1945, some journalists arrived at Buchenwald. The journalists included Edward R. Murrow, whose radio report about seeing Buchenwald was broadcast on CBS and became one of his most famous:

I asked to see one of the barracks. It happened to be occupied by Czechoslovaks. When I entered, men crowded around, tried to lift me to their shoulders. They were too weak. Many of them could not get out of bed. I was told that this building had once stabled 80 horses. There were 1,200 men in it, five to a bunk. The stink was beyond all description.

They called the doctor. We inspected his records. There were only names in the little black book, nothing more. Nothing about who these men were, what they had done, or hoped. Behind the names of those who had died, there was a cross. I counted them. They totalled 242. 242 out of 1,200, in one month.

As we walked out into the courtyard, a man fell dead. Two others, they must have been over 60, were crawling toward the latrine. I saw it, but will not describe it.
—

The Soviet Union held 28,455 prisoners, including 1,000 women, at Special Camp Number 2.[23] Soviet records say that 7,113 of these prisoners died.[23] They were buried in mass graves in the woods around the camp. Their families were not told they had died.

The NKVD (the Soviet police organization that ran the camp) would not let the prisoners talk to anyone outside the camp.[24] The NKVD also did not try to figure out whether the prisoners were guilty.[25]

On January 6, 1950, the Soviet Minister of Internal Affairs, Sergei Nikiforovich Kruglov, decided that the East German Ministry of Internal Affairs would take over all of the NKVD special camps, including the one at Buchenwald.[22] 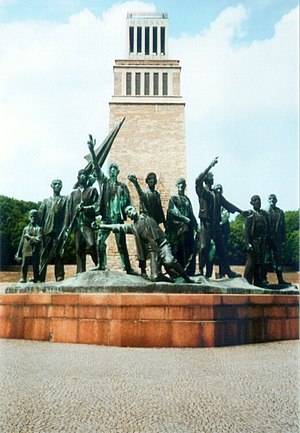 In October 1950, Buchenwald was destroyed. The main gate, the crematorium, the hospital block, and two guard towers were left standing. All prisoner barracks and other buildings were torn down. Many of them have been rebuilt.

Just days after the camp was liberated in 1945, freed prisoners built a monument to honor the people who died at Buchenwald. It was made of wood and was meant to be temporary. Eventually it was replaced by a monument made of stainless steel. The surface of this monument is kept at 37 °C (99 °F), the temperature of human skin, all year round.[26][27]

A second monument was also built in 1958, near where prisoners had been buried together in mass graves.

Some people who survived being imprisoned at Buchenwald have written about what happened to them. These people include:

On June 5, 2009, U.S. President Barack Obama and German Chancellor Angela Merkel visited Buchenwald. Elie Wiesel and Bertrand Herz, two survivors of Buchenwald, went with them.[30][31] During the visit, President Obama said at as a child, he had heard stories about Buchenwald from his great-uncle, who was part of the 89th Infantry Division. This Division was the first group of American soldiers to reach the Ohrdruf forced labor camp, one of Buchenwald's smaller camps.[30]