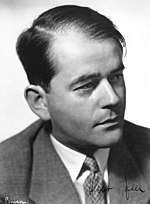 Berthold Konrad Hermann Albert Speer (19 March 1905 in Mannheim, Germany – 1 September 1981 in London, England) was a leading German architect in the Third Reich. Speer was born in Mannheim, Baden. Adolf Hitler's chief architect before he became the minister for munitions and armaments in 1942. He was also a member of Hitler's Cabinet. After World War II he was convicted of slavery and spent 20 years in prison.

Speer died of a stroke. His son, Albert Speer Jr. was also an architect.