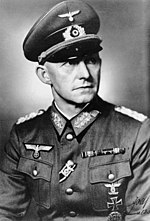 Alfred Josef Ferdinand Jodl (10 May 1890 in Würzburg – 16 October 1946 in Nuremberg) was a German military commander, was the Chief of the Operations Staff of the Armed Forces High Command (Oberkommando der Wehrmacht, or OKW) during World War II. At the Nuremberg trials he was tried, sentenced to death and hanged as a war criminal.