Some Caribbeans such as Jamaicans do not identify as African American, even if they have African ancestry.[4]

African Americans constitute 15.4 percent of Arkansas’s population, according to the 2010 census, and they have been present in Arkansas since the earliest days of European settlement. Originally brought to Arkansas in large numbers as slaves, people of African ancestry drove the state’s plantation economy until long after the Civil War. African Americans have exerted a profound influence upon all aspects of the state’s history and culture.

Atlanta was the home of Martin Luther King Jr. and an important place in the Civil Rights Movement.[6] It has been referred to as a "black mecca".

Delaware has a significant African American population. African Americans were enslaved in the state. In 1721, an estimated 2,000-5,000 black slaves lived in Pennsylvania and the three lower counties on the Delaware.[24]

The first black people to live in Texas were Afro-Mexicans when Texas was a Spanish colony.[26] Texas has one of the largest African-American populations in the country.[27] African Americans are concentrated in northern, eastern and east-central Texas as well as the Dallas, Houston and San Antonio metropolitan areas.[28] African Americans form 24 percent of both the cities of Dallas and Houston, 19% of Fort Worth, 8.1 percent of Austin, and 7.5 percent of San Antonio.[29]

Virginia is home to the longest continuous experience of African American life and culture in the United States spanning more than four centuries – beginning before the first English settlement at Jamestown and through the Revolutionary War, Civil War, Emancipation and the Civil Rights eras.

Outside of the United States, the history of African Americans in Ghana goes back to people such as American civil rights activist and writer W. E. B. Du Bois, who settled in Ghana in the last years of his life and is buried in the capital Accra. Since then, other African Americans who are descended from slaves imported from areas within the present-day jurisdiction of Ghana and neighboring states have applied for permanent resident status in Ghana. As of 2015, the number of African American residents has been estimated at around 3,000 people, a large portion of whom live in Accra.

Most of the first African Americans were brought to North America as part of the Atlantic slave trade. African slaves were brought to North America from 1619 to 1808. After the United States became independent, slavery became illegal in most northern states. At the same time, slavery grew more important to the economy of the southern states. Many African American slaves worked on plantations (large farms) that grew cotton and tobacco.[35] Plantation work was very difficult and slaves were often whipped and physically punished. It was illegal for slaves to learn how to read and write. White men often raped slave women, but were not punished.[36]

At the same time, there were many free African Americans in the north. Unlike slaves, they were allowed to start churches, write newspapers, and sometimes own property.[37] Frederick Douglass was an important abolitionist (fighter against slavery). Harriet Tubman helped to create the Underground Railroad, which helped African Americans to sneak away from their masters and become free. During the American Civil War from 1861-1865, the south broke away from the United States to form the Confederate States of America, or Confederacy. The United States won the war, and in 1865, it freed all slaves (about 4 million) by the 13th amendment.

African Americans were not slaves anymore, but white southerners passed laws called Black Codes that took away their freedom. Some African Americans served in government, but after 1877, the white southerners mostly kept them out of government. Whites founded the Ku Klux Klan to scare African Americans and stop them from voting.[35] Most southern African Americans became sharecroppers. Sharecropping was a system in which the farmers rented the land from the landowner and had to pay the landowner part of their crops.[38] Jim Crow laws segregated white and black people. Black people had to go to different schools and usually live in different neighborhoods than white people. Many businesses were for whites only. The Supreme Court case Plessy v. Ferguson said that black and white facilities could be separate but equal, but facilities for black people were usually worse. Lynching was often practiced against African Americans.

In the 1950s and 1960s, the Civil Rights Movement called for equality between African Americans and whites. The 1954 Supreme Court case Brown v. Board of Education banned racial segregation in schools. Many Southern schools still stopped black students from attending, until 1957, when federal troops forced a school in Little Rock, Arkansas to allow black students (called the Little Rock Nine). In 1955, Rosa Parks refused to give up her seat on a segregated bus. This started the Montgomery Bus Boycott, which involved Martin Luther King. King and Malcolm X were two leaders of the Civil Rights Movement, but they were both killed in the 1960s. In 1964, the Civil Rights Act banned discrimination based on race.[40]

Racism against African Americans is still prevalent in 2020. In 2020 during the COVID-19 pandemic, George Floyd was killed by a white police officer. Black Lives Matter is a movement which started in 2013. 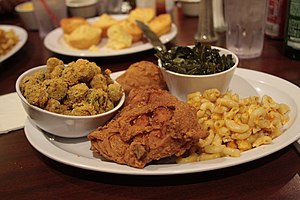 African Americans have influenced various forms of music, including Hip hop, R&B, funk, rock and roll, soul, blues, and other contemporary American musical forms while older black forms of music included blues, doo-wop, barbershop, ragtime, bluegrass, jazz, and gospel music. Michael Jackson, an African-American pop singer, released an album called Thriller in 1982 which is the best-selling album of all time. In the nineties Beyonce Knowles became famous as the lead singer of the R&B girl band Destiny's Child. In the 2000s she started releasing music on her own. Her first album Dangerously in Love sold 11 million copies and won five Grammy Awards.

The suicide rate for African Americans increased due to racism, police brutality and the COVID-19 pandemic.[42]