Alabama is a state in the United States. Its capital city is Montgomery. The largest city is Birmingham. It became a state in 1819. Native American tribes such as Cherokee, Chickasaw, Choctaw, and Creek first lived in Alabama.

The first people to live in Alabama were Native Americans before the arrival of Europeans. African Americans were sent to the state for slavery. 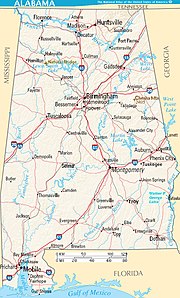 Alabama terrain map: it shows lakes, rivers, and roads. Mount Cheaha can also be seen in the right center, east of Birmingham.

Alabama is the thirty-first largest state in the United States with 52,419 square miles (135,760 km2) of total area. 3.19% of the area is water, making Alabama twenty-third in the amount of surface water, also giving it the second largest inland waterway system in the United States. About three-fifths of the land area is a plain with a general downward slope towards the Mississippi River and the Gulf of Mexico. North Alabama has mostly mountains, with the Tennessee River cutting a large valley creating many creeks, streams, rivers, mountains, and lakes.

The states bordering Alabama are Tennessee to the north; Georgia to the east; Florida to the south; and Mississippi to the west. Alabama has coastline at the Gulf of Mexico, in the very southern edge of the state. Alabama ranges in elevation from sea level at "Mobile Bay" to over 1,800 feet (550 m) in the Appalachian Mountains in the northeast. The highest point is "Mount Cheaha", at a height of 2,407 feet (734 m). Alabama's land has 22 million acres (89,000 km2) of forest or 67% of total land area. "Suburban Baldwin County", along the Gulf Coast, is the largest county in the state in both land area and water area.

The state is classified as subtropical Cfa under the Koppen Climate Classification. The normal annual temperature is 64 °F (18 °C). Temperatures are often warmer in the southern part of the state because it is close to the Gulf of Mexico, while the northern parts of the state, mostly in the Appalachian Mountains in the northeast, tend to be slightly cooler. Most of the time, Alabama has very hot summers and mild winters with copious rain throughout the year. Alabama receives an average of 56 inches (1,400 mm) of rainfall annually and enjoys a lengthy growing season of up to 300 days in the southern part of the state.

Summers in Alabama are among the hottest in the United States, with high temperatures averaging over 90 °F (32 °C) throughout the summer in some parts of the state. Alabama also gets many tropical storms and even hurricanes. Areas of the state far away from the Gulf can still feel the effects of the storms, which often dump big amounts of rain as they move inland and weaken. 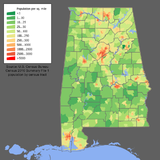 Alabama's agricultural outputs are poultry and eggs, cattle, plant nursery items, peanuts, cotton, grains (such as corn and sorghum), vegetables, milk, soybeans, and peaches. Although known as "The Cotton State", many reports say that Alabama is between eight and ten in national cotton making, with Texas, Georgia and Mississippi making up the top three.

"Public primary and secondary education" in Alabama is under the review of the Alabama State Board of Education as well as local oversight by 67 county school boards and 60 city boards of education. Together, 1,541 separate schools have education for 743,364 elementary and secondary students.