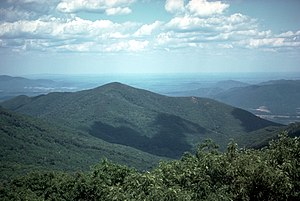 The Appalachian Mountains in North Carolina

The Appalachian Mountains (French: les Appalaches) are a large group of North American mountains. They are partly in Canada, but mostly in the United States. They form an area from 100 miles (160 km) to 300 miles (480 km) wide, running 1,500 miles (2,400 km) from the island of Newfoundland in Canada to central Alabama in the United States.

The Appalachian chain is a barrier to east-west travel. Ridgelines and valleys run north-south and travelers must climb them again and again. Only a few mountain passes run east-west. The Erie Canal was built through one of them. In most places the Appalachians are the watershed between the drainage basins of the Mississippi River and the Atlantic Ocean.

The term Appalachia is used to refer to the mountain range and the hills and plateau region around it. The term is often used to refer to areas in the central and southern, but not northern, Appalachian Mountains. These areas usually include all of West Virginia and parts of the states of Kentucky, Tennessee, Virginia, and North Carolina, and sometimes extending as far south as northern Georgia and western South Carolina, as far north as Pennsylvania, and as far west as southeastern Ohio. In 1965 the United States Congress created an Appalachian Regional Commission to include these areas and more, as far west as Mississippi.

History of the range

The Appalachians today are the worn-down remains of a once huge mountain chain. They first formed about 480 million years ago during the Ordovician. They once were as high as the Alps and the Rocky Mountains.[2][3]

The birth of the Appalachian ranges, some 480 million years ago (mya), was the first of several mountain-building plate collisions as the supercontinent Pangaea formed. The Appalachians were at the center of the newly formed Pangaea. North America and Africa were connected, and the Appalachians were part of the same mountain chain as the "Anti-Atlas" or Little Atlas Mountains in Morocco. This mountain range, known as the Central Pangean Mountains, extended into Scotland, from the North America/Europe collision (see Caledonian orogeny).