Jimmy Donal "Jimbo" Wales (/ˈdoʊnəl ˈweɪlz/; born August 7, 1966[1]) is a British-American Internet entrepreneur, best known as a co-founder of Wikipedia and Wikia.[2][3] Wales was born in Huntsville, Alabama, United States. There, he went to Randolph School. He then earned bachelor’s and master’s degrees in finance. In 1996, he and two partners founded Bomis. Bomis was an Internet portal with entertainment and adult content. The company gave money for Nupedia (2000–2003) and, after that, Wikipedia. 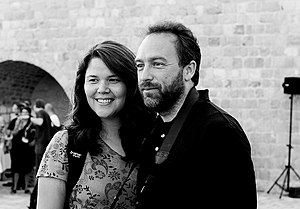 Wales says that he follows the ideas of Objectivism. He also says that he is a libertarian to some extent, meaning that he thinks people should be allowed to do whatever they want so long as they do not hurt others.

On January 15, 2001, with Larry Sanger and others, Wales started Wikipedia. Wikipedia is a free, open content encyclopedia. It grew and became popular very quickly. As Wikipedia became known to the public, he became the project’s promoter and spokesperson. He is often called a co-founder of Wikipedia, though he has argued against the "co-" part. He said he was the only founder.[10][11] Wales is on the Board of Trustees of the Wikimedia Foundation. In 2004, he co-founded Wikia, a wiki-hosting service which tries to make money. In 2015, Wales started the Jimmy Wales Foundation for freedom of expression, to try to help bloggers or internet activists who are in prison. [12]