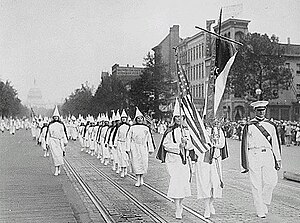 The Union as It Was 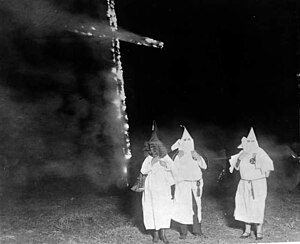 The Ku Klux Klan is a hate group.[1] It was started in the southern United States on March 3, 1865. Most of its hate has been towards African Americans, but it has also attacked Catholics, Jews and immigrants. It has sought to keep "white power", often through very violent acts such as killing people. The first Ku Klux Klan broke up and does not exist anymore. However, other groups with the same name and the same ideas have been created.

The Ku Klux Klan (acronym KKK) is an organization which was started in Pulaski, Tennessee in 1865.[2] This was after the American Civil War. It started as a social club for former Confederate soldiers.[2] The Klan quickly became a terrorist organization.[2] Its aim was to resist the Reconstruction of the United States.

During this time, the ex-Confederacy states were occupied territory. Klan members feared white people in the South could lose their supremacy. Also the Klan members firmly believed that African Americans were inferior to (less than) white people. The Klan acted against black voters to intimidate them.[3] At times, Republicans were also targets of attacks by the Klan,[3]

The methods of acting against people were often the same: the Klan members tried to frighten the people that the Klan wanted to go out of town. The KKK tried to scare people by burning crosses or by threatening them. If people did not react, the Klan would kill them. The growing violence which was promoted by the KKK led to many lynchings (execution without a fair trial and killing them, often by hanging). The KKK was "prohibited" (made against the law) in 1871. After 1871, many KKK members were imprisoned (put in Prison). However, the Klan had achieved many of its original goals. For example, the occupation troops were moved out of the Southern states, to the West. The KKK affected many African Americans throughout the last century. The establishment of Jim Crow laws restored white supremacy in the South and the "first era" KKK disbanded.[4]

In 1915, William J. Simmons, an Atlanta businessman, started the Ku Klux Klan for a second time.[5] A movie called The Birth of a Nation had just been released.[5] It showed African-American men (played by white actors in blackface) as stupid and sexually aggressive towards white women. It also showed the Ku Klux Klan as a heroic force.[6] The movie proved to be an excellent recruitment tool for the KKK.[5] Most of the rituals and traditions of the "old" Ku Klux Klan were kept. Any white Protestant man could join the KKK. The KKK still attacked African Americans, but they also attacked Jews and Catholics this time.[4] In 1920, the Klan began attracting recruits from all over the nation.[7] They promised better law enforcement, better government, better schools and to restore traditional family values.[7]

The KKK strongly argued for “white supremacy”. "White supremacy" is the belief that white people are superior to other racial groups.[8]

In 86 years, the KKK killed an estimated 3,446 black people.[9] Most often these were hangings and were not legal executions because there were no trials.[10] Many people now call these acts a form of terrorism because the KKK used fear to control African Americans and take away their political rights. After reaching its height of political influence, the second Klan began to decline.[7] There was a number of scandals, a great deal of internal feuding and people getting tired of their violent image.[7] In the 1920s they had reached a peak of about 5 million members.[7] By the 1930s they were down to about 30,000.[7] They survived another 14 years before disbanding in 1944.[7] This was after they had been prosecuted for failure to pay federal income taxes.[7]

In 1954, the United States Supreme Court (the highest court in the US) made an important decision. The case was Brown v. Board of Education of Topeka, Kansas. The court ruled (decided) that it was unconstitutional to have different schools for black and white children.[11] When this ruling passed, many independent Ku Klux Klan groups attacked African Americans.[7]

In the summer of 1964, Edgar Killen killed three African Americans that participated in the civil rights movement.[12] Killen was a member of the Ku Klux Klan.[12] There was an early trial in 1967, but in this trial there was an all-white jury.[12] It resulted in a hung jury so Killen was set free.[12] In 1988 a movie called Mississippi Burning was made which talked about the events of this case.[12] In 2005 there was another trial.[12] Killen (at the time 80 years old) was sentenced to prison for 60 years.[13] He died in January 11, 2018 in prison in Parchman, Mississippi at age 92.