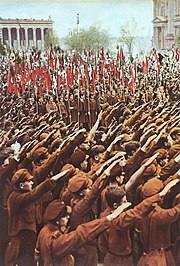 A membership with commitment and consequences

Also a membership, with quite different consequences 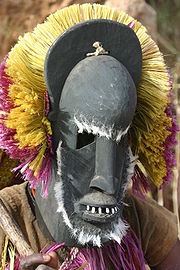 A ritual (or a rite) is a set of actions people do. In a ritual, the actions are important because every action stands for something. Each ritual of a type is done in a certain way.[1][2] Danger might be involved in carrying out the ritual. When the ritual has been performed successfully, it is often followed by a celebration.

Rituals can mark a personal change. For example, a rite of passage may show that a child has reached the age of majority. All societies seem to have had them.[3]

A religious rite is a religious ceremony. Many rituals have a religious significance and are part of the religion or traditions of a community. The rite signals that those who take part are members of the religion, or believers in the religion. The rite may signal status, qualification, prayer and commitment to the god or to the belief.

A rite need not be to a religion as understood in the present day. Fervent support of a sports team, or kissing the ring of an organised crime lord, or a military enrollment is equally a rite, because it has consequences for the behaviour of the person, and for their beliefs.[4][5]

A ritual can also be linked to obsessive compulsive disorder, when a person believes that performing the ritual again and again is necessary.