This article is about mass as a ceremony, for other uses see: Mass (disambiguation) 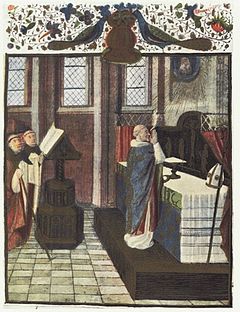 A Medieval Low Mass by a bishop.

Mass is the term used to describe celebration of the Eucharist in the Western liturgical rites of the Roman Catholic Church, Old Catholic Churches, in the Anglo-Catholic tradition of Anglicanism, and in some largely High Church Lutheran regions: in Scandinavian and Baltic countries the Lutheran Eucharistic service is also known as "the Mass".

The term comes from the late-Latin word missa (dismissal), a word used in the concluding formula of Mass in Latin: "Ite, missa est" ("Go, it is the dismissal").[1]

Present form of the Roman rite of the Mass

Tridentine form of the Roman rite of the Mass