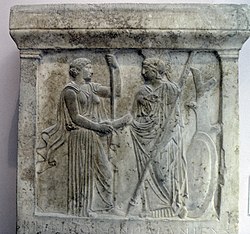 Handshake from 5th century BC, commemorating friendship of Samos (left) and Athens (right)

A handshake is when two people hold hands for a few seconds and move them up and down before letting go. It is often used like a greeting (like saying "Hello, Hi" or "goodbye" when people meet) or to say that two people have agreed on something. Handshakes are also used between romantic partners.

The action is ancient, and occurs (or occurred) in many cultures. There are, however, many slight differences. In some cultures, the handshake is firm, in others it is gentle. In some cultures the senior person leads the handshake. The length of time also varies between cultures. One thing is almost universal: hand shaking is done with bare hands.

Another aspect is: do men shake hands with women? In the past, in many societies, they did not. Today, in western society, handshakes are allowed if the female offers her hand. It is not done between family members, when hugs and kisses are more usual.

Some secret societies have secret handshakes to show they are part of the group.