Slavery in the United States 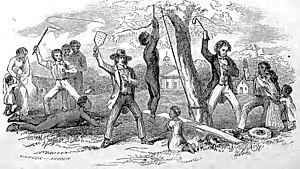 By the time of the American Revolution (1775–1783), slaves had been institutionalized as a racial caste. The caste associated with African ancestry.[1] When the United States Constitution was ratified in 1789, a small number of free people of color were able to vote. This was because they were men who owned property.[2] During and shortly after the Revolutionary War, abolitionist laws were passed in most Northern states, and there was a movement created to end slavery. Slave states tried to extend slavery into new Western territories. They wanted to do this to keep their share of political power in the country. Southern leaders also wanted to annex Cuba as a slave territory. The United States became split over the issue of slavery. It was split into slave and free states. The Mason–Dixon line divided the country. The line divided (free) Pennsylvania from (slave) Maryland.

While Jefferson was president, Congress prohibited the importation of slaves, effective 1808. Although smuggling (illegal importing) through Spanish Florida was common.[3][4] Slave trading within the United States, however, continued at a fast pace. This was because there was a need for labor due to the creation of cotton plantations in the Deep South. New communities of African-American culture were created in the Deep South. There were 4 million slaves in the Deep South before they were set free.[5][6]

A slave sold at public auction

The first Africans came to the New World with Christopher Columbus in 1492. An African crew member named Juan Las Canaries was on Columbus's ship. Shortly after, the first enslavement happened in what would later be the United States. In 1508, Ponce de Leon created the first settlement near present-day San Juan. He started enslaving the indigenous Tainos. In 1513, to supplement the decreasing number of Tainos people, the first African slaves were imported to Puerto Rico.[7]

The first African slaves in the continental United States came via Santo Domingo to the San Miguel de Gualdape colony (most likely located in the Winyah Bay area of present-day South Carolina). It was created by Spanish explorer Lucas Vázquez de Ayllón in 1526.[8]

The colony was almost immediately disrupted by a fight over leadership. During the fight, the slaves revolted, and they ran away from the colony to hide among local Native Americans. De Ayllón and many of the colonists died shortly after from a sickness. The colony was abandoned. The settlers and the slaves who didn't run away went back to Haiti, from where they came.[8]

On August 28, 1565, St. Augustine, Florida was created by the Spanish conquistador Don Pedro Menendez de Aviles. He brought three African slaves with him. During the 16th and 17th centuries, St. Augustine was the where a lot of the slave trade in Spanish colonial Florida happened. It was the first permanent settlement in the continental United States to have African slaves.[9]

60 years later, in the early years of the Chesapeake Bay settlements, colonial officials found it difficult to convince people to come and work for them. This was because the weather and environment of the settlements was very harsh. There was a very high chance that people would die.[10] Most people came from Great Britain as indentured laborers. They signed contracts that said they would pay with work for their transportation, their upkeep, and their training, usually on a farm. The colonies had agricultural economies. These people were often young people who wanted to become permanent residents. In some cases, convicted criminals were sent to the colonies as indentured laborers, rather than being sent to prison. These people were not slaves, but they were required to work for four to seven years in Virginia to pay for the cost of their transportation and maintenance.[11] Many Germans, Scots-Irish, and Irish came to the colonies in the 18th century, settling in the backcountry of Pennsylvania and further south.[10]

The first 19 or so Africans to reach the English colonies arrived in Jamestown, Virginia, in 1619. They were brought by English privateers who had seized them from a captured Portuguese slave ship.[12][13][14] Slaves were usually baptized in Africa before sending them. As English custom then considered baptized Christians exempt from slavery, colonists treated these Africans as indentured servants. The African indentured servants joined about 1,000 English indentured servants already in the colony. The Africans were freed after a period of time. They were also given the use of land and supplies by their former masters.

There were no laws about slavery in Virginia's early history. However, in 1640, a Virginia court sentenced John Punch, an African, to slavery. This was because he tried to run away from his service.[16] He ran away with two white people. The two white people were sentenced only to one more year of their indenture, and three years' service to the colony.[17] This is the first legal sanctioning of slavery in the English colonies. It was one of the first legal distinctions made between Europeans and Africans.[16][18]

In 1641, Massachusetts became the first colony to allow slavery through law.[19] Massachusetts passed the Body of Liberties. It banned slavery in many cases, but it allowed slaves to be held if they were prisoners of war, if they sold themselves into slavery or were bought somewhere else, or if they were sentenced to slavery as punishment by the government.[19] The Body of Liberties used the word "strangers" to refer to people bought and sold as slaves; they were generally not English subjects. Colonists believed this term referred to Native Americans and Africans.[20]

During most of the British colonial period, slavery existed in all the colonies. Slaves in the North usually worked as house servants, artisans, laborers, and craftsmen. Most were in cities. Many men worked on the docks and in shipping. In 1703, more than 42 percent of New York City households had slaves. New York City had the second-highest proportion of slaves of any city in the colonies after Charleston, South Carolina.[21] Slaves were also used as agricultural workers in farming communities. This included areas of upstate New York and Long Island, Connecticut, and New Jersey. By 1770 there were 397,924 Blacks in a population of 2,170 million. They were not spread out evenly. There were 14,867 in New England where they were 2.7% of the population; 34,679 in the mid-Atlantic colonies where they were 6% of the population (19,000 were in New York or 11%); and 347,378 in the five southern colonies where they were 31% of the population.[22]

The South developed an agricultural economy. It relied on commodity crops. Its planters quickly got more slaves. This was because its commodity crops were labor-intensive.[23]

While there were some African slaves that were kept and sold in England,[26] slavery in Great Britain had not been allowed by statute there. In 1772, it was made unenforceable at common law in England and Wales by a legal decision. The big British role in the international slave trade continued until 1807. Slavery continued in most of Britain's colonies. Many rich slave owners lived in England and had a lot of power.[27]

An animation showing when United States territories and states forbade or allowed slavery, 1789–1861

In early 1775 Lord Dunmore, royal governor of Virginia, wrote to Lord Dartmouth. He wrote he was going to free slaves owned by Patriots in case they rebelled.[28] On November 7, 1775, Lord Dunmore issued Lord Dunmore's Proclamation which declared martial law.[29] He promised freedom for any slaves of American patriots who would leave their masters and join the royal forces. Slaves owned by Loyalist masters, however, were not going to be freed by Dunmore's Proclamation. About 1500 slaves owned by Patriots ran away and joined Dunmore's forces. Most died of disease before they could do any fighting. Three hundred of these freed slaves made it to freedom in Britain.[30]

Many slaves used the war to run away from their plantations. They would run into cities or woods. In South Carolina, nearly 25,000 slaves (30% of the total enslaved population) ran away, migrated, or died during the war.[what does this mean?] In the South, many slaves died, with many due to escapes.[31] Slaves also escaped throughout New England and the mid-Atlantic, joining the British who had occupied New York.

Slaves and free blacks also fought with the rebels during the Revolutionary War. Washington allowed slaves to be freed who fought with the American Continental Army. Rhode Island started enlisting slaves in 1778. Rhode Island promised money to owners whose slaves enlisted and lived to gain freedom.[32][33] During the course of the war, about one fifth of the northern army was black.[34] In 1781, Baron Closen, a German officer in the French Royal Deux-Ponts Regiment at the Battle of Yorktown, estimated the American army to be about one-quarter black.[35] These men included both former slaves and free blacks.

In the 18th century, Britain became the world's biggest slave trader. Starting in 1777, the Patriots made importing slaves illegal state by state. They all acted to end the international trade. However, it was later reopened in South Carolina and Georgia. In 1807 Congress acted on President Jefferson's advice and made importing slaves from other countries a federal crime, as the Constitution permitted, starting January 1, 1808.[36] 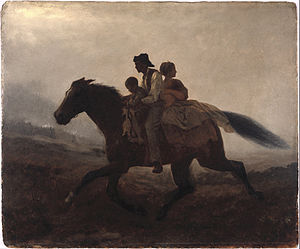 This painting by Eastman Johnson is called "A Ride for Liberty". It shows a family of slaves riding to their freedom.

In the United States in the early nineteenth century, owners of female slaves could freely and legally use them as sexual objects. This is similar to the free use of female slaves on slave ships by the crews.[37]:83

"Fancy" was a code word that meant the girl or young woman was able to be used for or trained for sexual use.[38]:56 Sometimes, children were also abused like this. The sale of a 13-year-old "nearly a fancy" is documented.[39]

Furthermore, females who were able to become pregnant were supposed to be kept pregnant,[40] so they could make more slaves to sell. The differences in skin color found in the United States make it obvious how often black women were impregnated by whites.[41]:78–79 For example, in the 1850 Census, 75.4% of "free negros" in Florida were described as mulattos, of mixed race.[42]:2 Nevertheless, it is only very recently, with DNA studies, that any sort of reliable number can be provided, and the research has only begun. Light-skinned girls, who contrasted with the darker field workers, were preferred.[39][43]

Oral histories and autobiographies of ex-slaves