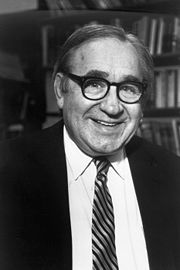 Robert William Fogel (July 1, 1926 – June 11, 2013) was an American economic historian and scientist, and winner (with Douglass North) of the 1993 Nobel Memorial Prize in Economic Sciences.

Fogel was born on July 1, 1926 in New York City, New York to Russian-Jewish parents. He was raised in Chicago, Illinois. Fogel graduated from Stuyvesant High School in 1944.[1] He studied at Cornell University, at Columbia University, and at Johns Hopkins University. Fogel died on June 11, 2013, at a health services center in Oak Park, Illinois of a short illness, aged 86.[2][3][4]