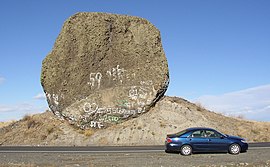 A landform is a word that describes a form of land. Each type of landform is defined by its size, shape, location, and what it is made of.

Landforms that are related to flowing water.

Landforms made by erosion and weathering usually occur in coastal or fluvial areas, and many are listed under those headings. Some other erosion landforms that are not listed in those categories include: