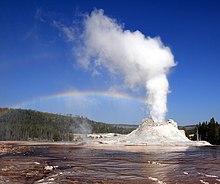 A geyser is a hot spring which shoots out water and steam.[1][2] They erupt when pressure has built up, often at regular intervals. There are about a thousand geysers around the world. About half are in Yellowstone National Park, Wyoming, United States.[3]

Geysers are made in special geological conditions. Only a few places on Earth have these conditions. Because of this, geysers are not very common. One place is the Yellowstone National Park, which is the remains of a gigantic volcano. Another is Iceland, which sits on top of the Mid-Atlantic Ridge, where new Earth's crust is formed.

Geysers are often near active volcanos. This is because the geyser is caused by magma.[2] Surface water usually goes down to about 2,000 metres (6,600 ft). There, it mixes with hot rocks. The pressurized water begins to boil. When it is pressured enough, hot water and steam burst out of the geyser.

Individual geysers do not last forever, but systems of geysers last as long as the geological situation continues. The oldest individual geysers are only a few thousand years old.[4] Geysers are usually near volcanic areas.[4] As the water boils, the pressure increases. This forces hot steam and water to the surface through the geyser. Geysers are usually made because of three things that are around volcanoes.[4]

Great heat
A geyser needs a lot of heat. This heat comes from magma. This magma needs to be near the surface of the earth. Geysers need much more heat than is usually found near the earth's surface. This is why they are often around volcanoes or volcanic areas.

Water
The water that bursts from a geyser must travel underground through deep, high-pressure cracks in the earth's crust.

Most importantly, the temperatures near the bottom of the geyser become high enough to start boiling the water. Steam bubbles come out of the top of the column. They burst through the geyser's vent. Some water flows or splashes out. This makes the weight of the column of water and the pressure on the water below less. When this pressure is released, the hot water turns into steam. It boils violently.[4]

The moon has eruptions which are called geysers. There, the eruption takes place from vapor only. The liquid part is not present there. They are more easily seen because of the bits of dust and ice carried by the vapor. Water vapor streams have been seen near the south pole of Saturn's moon Enceladus. Nitrogen eruptions have been seen on Neptune's moon Triton. Carbon dioxide eruptions from the southern polar ice cap of Mars have also been seen.