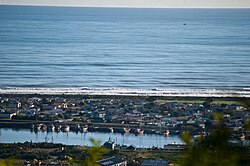 Blaketown Lagoon, New Zealand: it is connected to the sea.

A lagoon is a body of salt water partly separated from the sea. There's usually some sort of barrier which separates and protects the lagoon. This may be a pebble or shingle beach, sand bank, or perhaps a coral reef surrounding an island (that's called an atoll.)

Lagoon refers both to coastal lagoons, and the lagoons in atolls, formed by the growth of coral reefs on slowly sinking central islands.