Chesil Beach from the Isle of Portland. 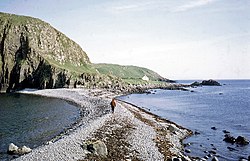 Storm beach connecting Garbh Eilean and Eilean an Tigh in the Scottish Western Isles. The narrow neck of pebbles is covered at spring tides and during storms.

Pebbles on a shingle beach in Somerset, England

A shingle beach is a beach which is formed of pebbles. These beaches strongly resist erosion by waves.

This beach landform is quite common in Western Europe, because the pebbles come from the lines of flint in the chalk. Chesil Bank is an example. When the chalk erodes, the tough flint stays as pebbles.[1]

Other examples are found in Bahrain, North America and in a number of other world regions.

On the east coast of New Zealand's South Island, there are mixed shingle and sand fans amongst braided rivers. The ecosystems formed by this mix of pebbles and sand allow colonization by rare and endangered species.